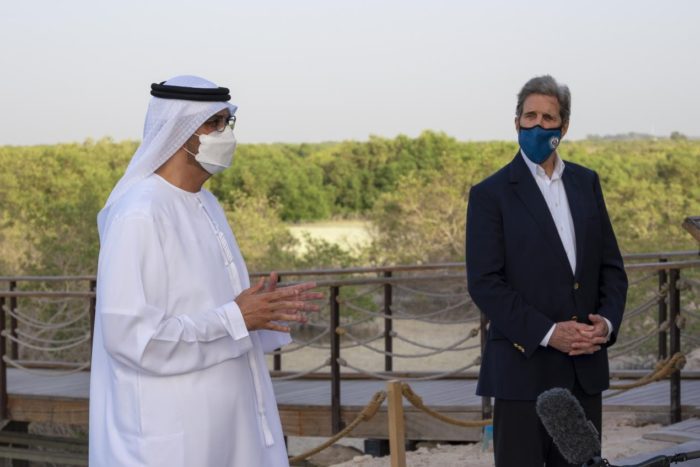 His Excellency Dr. Sultan Ahmed Al Jaber, Minister of Industry and Advanced Technology and UAE Special Envoy for Climate Change issued the following statement following the announcement of the participation of His Highness Sheikh Mohammed bin Rashid Al Maktoum, Vice President and Prime Minister of the UAE and Ruler of Dubai at U.S. President Biden’s Leaders Summit on Climate:

The United Arab Emirates is honored to participate in the Leaders’ Summit on Climate. The Summit is a key milestone in the international climate space and strengthens momentum toward the United Nations Climate Change Conference (COP26) this November in Glasgow.

The UAE has a longstanding track record in proactively adopting and promoting clean energy and carbon mitigation technologies as a key pillar of our economic diversification strategy. We have always viewed progressive climate action as an opportunity for economic growth. We know there is a strong business case for investment in climate mitigation and adaptation technologies, and that our investments will deliver jobs and economic growth alongside carbon savings.

Due to early investment and policy choices, the UAE now enjoys the lowest-cost solar power in the world, enabling further competitiveness in our industries and services.  We are also one of the first countries in the region to implement commercially viable carbon capture and storage at scale, providing an important proof point for traditionally challenging emission sectors. We are also investing in new zero-carbon fuels, including hydrogen that shows promise as an energy source of the future.  Furthermore, we are sharply increasing our investment in innovation and R&D for agriculture and food systems, to both adapt to climate change and reduce emissions – which will be the focus of a major new global partnership to be announced shortly.

The UAE has and will continue to demonstrate constructive leadership in climate action.  Earlier this month, we  hosted U.S. Special Presidential Envoy for Climate John Kerry and COP26 President Alok Sharma in Abu Dhabi, along with high level representatives from 10 MENA economies  for the UAE Climate Dialogue. The dialogue concluded in a landmark joint statement from the region, as well as a bilateral statement between the UAE and the U.S. committing to accelerate climate action.

The UAE has always sought to offer a practical, constructive voice on the climate agenda, and we stand ready to work with the US and our global partners to make this critical year a clear success for climate action.

President Biden’s Leaders Summit on Climate is an important moment on the path to the pivotal UN Climate Change Conference (COP26) this November in Glasgow. The Summit is designed to maximize the odds for global climate action at COP26. The themes of the Summit include finding strategies for reducing emissions; how to jumpstart private and public sector finance to drive the net-zero transition, and how to surface new and transformational technologies to reduce emissions.

President Biden 40 world leaders to join him at the Summit, which begins April 22. Those invited were selected for being key voices in the climate fight, including the heads of governments that are demonstrating strong climate leadership and are charting particularly innovative pathways to a net-zero economy.