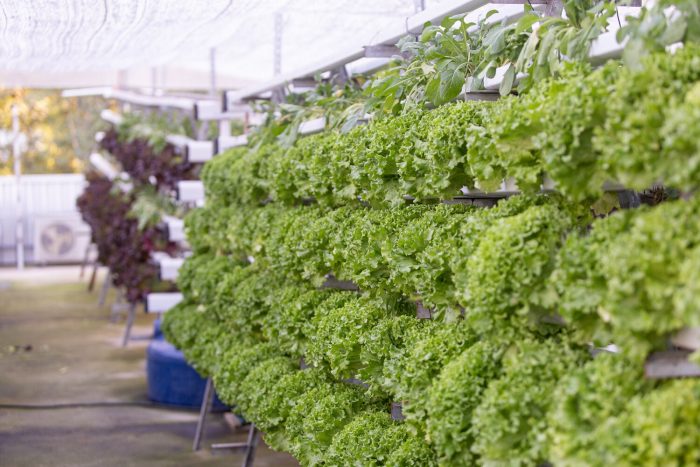 The Urban Farm Rethinking the Use of Space in São Paulo

The founding partner of Fazu, an urban farm in São Paulo, was flying over the metropolis of 12+ million people when he noticed just how much unused gray spaces dominated the landscape from above. A thought stuck with him: “Why not use hydroponics to color up the city’s rooftops and slabs while also bringing healthier and fresher products to the population?”

Fazu’s mission is to change the way leafy greens are produced and consumed in Brazil. Gabriel Cano, the Co-Founder and CEO of Fazu tells us, “The conventional way of distributing vegetables has been the same for ages. That is, rural production goes to marginal locations near large cities and supplies them with food.” Fazu thinks there are more creative and efficient ways to tackle this problem. “Our goal is to rethink the vegetable chain and bring truly healthy, fresh food that does not degrade the environment for a democratic price to both regular clients and restaurants,” says Cano.

Urban farming has gained popularity in Brazil over the past few years, but the market is still very niche and market prices are still very high, making it difficult for consumers and restaurants to afford these locally-grown products. Many Brazilian cities have also faced issues with food distribution. From producers to consumers, there are two main paths for food distribution. Producers either sell straight to big retailers or to São Paulo’s open vegetable market, Companhia de Entrepostos e Armazéns Gerais de São Paulo (CEAGESP). However, food loss occurs along each path. If a product is not sold off the retailer’s shelves in 2-3 days, it is discarded. At the CEAGESP, food loss mainly occurs due to poor handling and logistics both at the market as well as by the end user – usually restaurants or retailers.

Both of these paths create “an excessive number of intermediaries between harvest and consumption” leading to ”a loss of ~40% of total crop production,” Cano explains. Fazu eliminates food waste by only harvesting daily what will be delivered to their customers. “We are currently working with <1% waste on our farm. If we have excess inventory of specific products we either donate them to NGOs or send as a ‘free trial’ to chefs and influencers.” In a country with such a high inequality gap, this number is extremely important. With few players in Brazil’s urban farming landscape, there is a great opportunity for the industry to grow.

Fazu’s approach to urban farming is different from most. Instead of renting big warehouses and relying on artificial lighting, they are using underutilized areas with plenty of sun exposure to install modular farms. By dramatically reducing operating costs, such as energy and facility rent, they can deliver a high-quality product at a reasonable price point for their customers. Fazu utilizes social media and mobile messaging apps, like Instagram and Whatsapp, in addition to their e-commerce website, to sell directly to consumers. Navigating other sales channels, outside of selling through retailers, is what allows them to maintain competitive pricing and profit margins.

According to Fazu, the biggest challenge of urban farming is economics. “The ‘urban farm’ idea is incredible on paper; nevertheless, it is very difficult to put into practice. Unless you have positive economics and can consistently deliver quality products with a democratic price for the majority of the population, urban farm companies will be a super-niched category or a cash-burn machine,” says Cano.

In addition to creating a positive social impact, working closely with the local community has been an amazing branding tool for Fazu. “We see that our consumers are willing to pay a higher price for products by companies that are aligned with their principles,” says Cano. The modularity of Fazu’s farms allows them to explore a variety of sites to install them. One such farm is inside an NGO. The NGO provides space and labor and Fazu provides them with a stable cash flow to support their projects, creating a sustainable relationship for both parties in the long run.

While COVID-19 was late to spread in South America, Brazil now has the most reported cases and deaths in Latin America. Ineffective response to the pandemic by President Bolsonaro has threatened the country. The pandemic has made many businesses around the world rethink business models and economics, we’ve seen how agriculture and restaurants, in particular, have had to rethink supply chains. Fazu is no different: “Since most of our clients pre-COVID were restaurants, the pandemic impacted us negatively at first. Nevertheless, the pandemic made us rethink both our economics and our B2C business line, which now is performing much better than before,” says Cano. While many business owners took a financial hit initially, they must innovate and remain optimistic. Fazu has done just that. “The overall impact in terms of top-line was negative but we believe we are leaving the pandemic stronger than we were when it all started.”