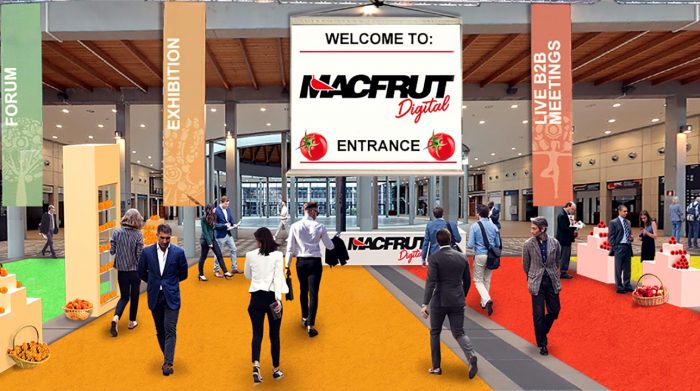 The countdown begins for Macfrut Digital

The numbers of the first and only digital trade fair for the fresh produce industry, to be held from 8 to 10 September, are outstanding: 530 exhibition spaces, 40% of which will be hosted by foreign companies, 600 registered buyers from all over the world and 4,000 registered visitors to date, 70% of which are from abroad.

The first edition of Macfrut Digital, the virtual trade fair for the fresh produce industry to be held from 8 to 10 September 2020, born from the intuition of Cesena Fiera, is drawing near. And the numbers recorded so far, just a few days before its official opening, prove that it was a good intuition: 530 exhibition units have been sold to 400 exhibitors (when the event was launched, the target was 200 units for a total of 150 exhibitors), registrations have sold out and companies have been put on a waiting list, with many foreign participants equal to 40% of the exhibiting companies and 600 buyers that have already registered on the platform, of which 550 from abroad. The ICE – Italian Trade Agency offices around the world and Cesena Fiera’s network of foreign agents played a key role in attracting buyers.

The most striking numbers are those relating to foreign participants. Nearly one in two exhibitors comes from abroad, with China leading the way with as many as 87 exhibitors, thanks to the collaboration with ATPC (Agricultural Trade Promotion Centre), the promotional body of the Chinese Ministry of Agriculture and Rural Affairs, which was one of the supporters of the event. In addition to China, there will be several collective stands in the “Country Pavilion”, the international pavilion that has been added to the nine pavilions initially planned. Participants who have registered come from Central and South America (Colombia, Chile and the Dominican Republic) and there will be a large number of participants from Africa also in this digital edition of the event, thanks to partnerships established with UNIDO (United Nations Organisation for Industrial Development), Lab Innova and AICS (Italian Association for Culture and Sport). Not to mention Europe, with participants from Belgium, France, Germany, Greece, the Netherlands, Spain and Switzerland. There will also be many participants from Eastern Europe (Albania, Bulgaria and Ukraine).

Exhibitors will have a privileged channel where they will be able to “communicate” with the 600 buyers that have already registered on the platform (550 from abroad and 50 from Italy) and organise B2B meetings. In fact, Macfrut Digital will offer two levels of interaction: one for visitors, who will be able to visit the virtual stands, communicate with each other, ask for information and make contact to schedule business meetings, and the other for exhibitors, who will be able to schedule B2B meetings with buyers through a programmed agenda, with the support of Cesena Fiera’s staff in order to align the agendas and meet the specific interests of the buyers and companies involved. Macfrut Digital can be accessed from any Internet device (PC or smartphone), while B2B meetings will be accessible online but only from PC, via a dedicated link provided by the staff.

The Macfrut Digital platform can be accessed subject to registration, which is free of charge. As of today, more than 4,000 visitors have already registered, 70% of whom are from abroad. In the last few days, participation requests have increased exponentially. Therefore, those who are interested in participating should register as soon as possible to secure their participation, bearing in mind that a maximum number of 30,000 visitors is allowed.

Renzo Piraccini, President of Macfrut, explains: ‘We have embarked on a new adventure and we can safely say that the fruit and vegetable sector has responded extremely well. We believe that we are pioneering a project that has huge potential, which was unimaginable until a few months ago. The fact that the health emergency is ongoing, resulting in a level of uncertainty at international level, demonstrates that we made the right decision, which has changed the way we approach the sector.’