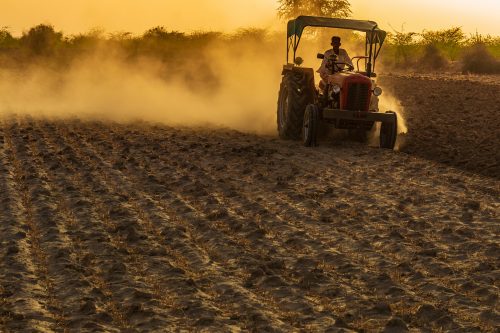 In tractors the raw edge V-belt Conti-V FO is mainly used for driving the water pumps, alternator and air compressors

In its tractors, Mahindra uses the raw edge V-belt Conti-V FO mainly for driving the water pumps, alternator and air compressors, while in combine harvesters Conti-V belts are primarily responsible for the main drive, various auxiliary drives and also for the straw management system.

The belts’ specifications mean these are absolutely ideal for the Indian market. “Both have been designed for demanding drives and are proving very suitable in Mahindra’s machines in light of the challenging requirements posed by Indian agriculture,” says Thorsten Schwefe, who is responsible at Continental for technical sales of power transmission belts for the agricultural industry. “One of the measures of good performance is sustained, high power transmission.” The belts also feature excellent temperature resistance – and are therefore designed to cope with operation in tropical zones. Both heavy-duty V-belts are dust-resistant and conditionally oil-resistant.

For technical components such as heavy-duty V-belts, the region-specific weather conditions prevailing in India, which rigorously test both the material and the design, are especially challenging. Particularly as the belts are an important part of the machine’s engineering design and have a significant impact on the vehicles’ overall performance. “The climatic conditions in India make substantial demands on agricultural machines and thus also on the components such as our V-belts. Muddy fields, oppressive heat and a harsh environment mean in particular that maintenance of the belts is not always easy,” declares Schwefe.

Local production enables proximity to the customer and the market

Continental ships around 500,000 belts annually to Mahindra. They are mainly used in tractors and combine harvesters on the Indian market, but also in many other Asian countries, such as China, Indonesia or Thailand. Local manufacturing in Sonepat means not only that Continental can deliver the belts very promptly, but also that in-house experts can provide advice and assistance on the ground: “For our customers, high quality, on-time-to-requirement delivery and a good price/performance ratio are crucial factors. Our ability to manufacture and provide advice locally is the icing on the cake,” emphasizes Schwefe.

Another reason for the high demand for components and solutions for the Indian agricultural industry is that fast-growing rice and cereal varieties, often leading to two and three harvests annually, are now commonly planted – calling for an even higher level of technical support. “The Indian market is very dynamic. The agricultural industry there is still in its infancy in terms of technologization and automation. The market has great potential for the future and therefore remains a really exciting prospect for us as a technology company – and not only for belts,” says Schwefe.

This potential relates not just to original equipment. Continental also supplies the Indian agricultural machinery manufacturer with belts for its aftermarket business. “Our partnership with Mahindra is an example of how well their OEM and their aftermarket business can go hand in hand – and how much confidence there is in our products and our local production in India. Because we can operate so flexibly locally, we can guarantee reliable delivery of the belts,” says Schwefe.

According to the Statista statistics portal, India is the seventh-largest country in the world with an area of 3.3 million square kilometers and has a population of approximately 1.33 billion. Only China, with about 1.4 billion, has an even larger population. Even though the Indian subcontinent is becoming more and more industrialized, agriculture is still a very marked feature of the country. Around half the population work in the sector or are subsistence farmers.

India’s agricultural industry is greatly dependent on the weather conditions, not least on the monsoon that affects the climate in a large part of the country in the period from July to October. The south has a tropical climate, while the rest of the country experiences subtropical weather.

Humid heat, boggy ground and ankle-deep water in which both people and machines are immersed are therefore also defining features of the planting and harvesting of rice, which is the staple food in India and throughout Asia. At the same time, it is just one example of the demanding requirements made of technical systems and workers in the field by Indian agriculture. Because even though India is the second-largest producer of rice in the world, in its more arid regions in particular it mainly grows other crops, such as millet, wheat, pulses, potatoes and fruit. The commonest agricultural machines seen at harvest time are from Mahindra. They are the dominant feature of Indian fields.

Continental belts are making a major contribution to increasing harvest efficiency in India’s agricultural sector, a market that will require further technical solutions in the future.