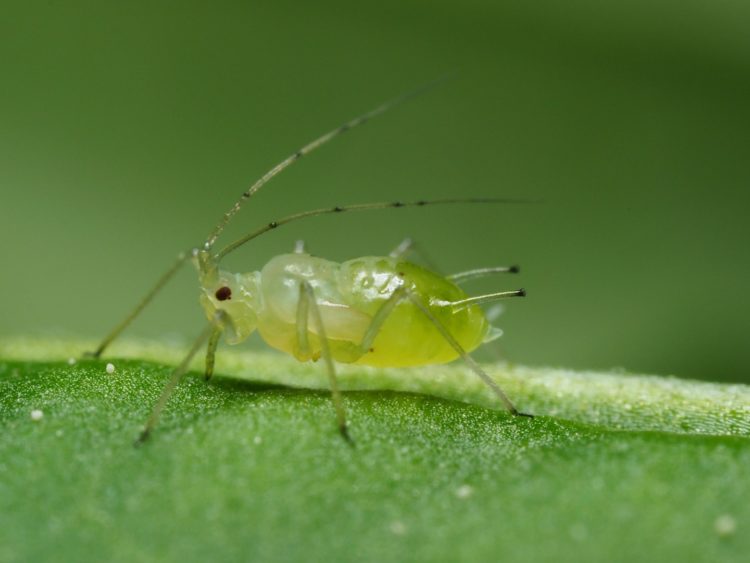 Aphids belong to the same family as whitefly, leafhoppers, mealybugs and scale insects – the true bugs (Hemiptera).  These sap-sucking insects with a high reproductive capacity, are harmful to a wide range of protected and outdoor crops worldwide.

Aphids can transmit viruses such as the damaging cucumber mosaic virus (CMV) – and various species, notably M. persicae, are resistant to numerous pesticides.

Aphids suck plant sap to obtain sugars and proteins. While reducing plant vigour, they can also cause visual distortion and damage to leaves and growth points.

Aphids excrete sugary honeydew which can render plants and/or fruit unsaleable due to stickiness and sooty mould growth; this can also negatively impact photosynthesis. Some ant species consume the honeydew while defending the aphids against natural enemies – acting like miniature farmers.

It can be useful to use the crop plant as a starting point in the identification process – as some species have preferred hosts. Aphid’s morphological features, such as body size, shape and colour, can be key to identifying the species.

Aphids can arrive on young plants from propagators. The first signs are often white, moulted skins or small, sticky, shiny specks of honeydew on leaves. Most species feed on the underside of leaves or the upper main stem and branches; as they prefer actively growing soft, young tissues.

Very fast population growth means aphid infestations can be hard to control if not detected early. Frequent scouting is recommended – at least twice weekly when plants are young and growing fast. Use Bug-Scan® Yellow Sticky Traps to monitor for winged aphids entering the crop. If the plants enter the glasshouse ‘clean’ (pest free), winged aphids caught on traps are often the first sign action is needed.

For the purposes of biocontrol, we generally divide aphids into large and small species.

For larger aphids – such as Macrosiphum and Aulacorthum – Aphidius ervi is the specialist (Ervi-System). Other parasitoids in the Biobest range show less preference.

So how do parasitoids (wasps) work? After mating a female wasp lays her egg inside an aphid where the larva develops. The aphid is killed and turns into a mummy – from where a new wasp hatches and the cycle starts again.

Predators are also important players. With voracious appetites, they can wipe out large aphid colonies very quickly. These predators need plenty of food to build up a resident population. To optimise control, it is best to include predators and parasitoids in the strategy.

Biorationals are also playing an increasing important role. Physically acting products – such as soaps, oils suffocate or dehydrate aphids. Protac SF®, a special formulation of silicon polymers, forms a thin sticky net on the body surface, which immediately immobilizes the aphid. They can impact on natural enemies, so they need to be carefully integrated into the strategy.

Plant-derived insecticides, such as SPYRO® (a pyrethrin derived from Chrysanthemum) have very short persistence so biocontrols can be re-introduced very soon after spraying

In extreme situations, it may be necessary to apply a conventional pesticide. If so, action should be taken to minimise the effects on populations of natural enemies.