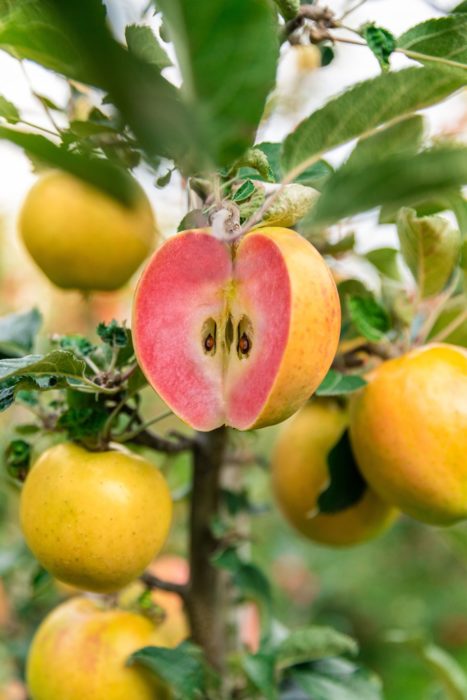 Excellent internal colour and good quality thanks to favourable weather conditions. Tests in various countries worldwide and a number of marketing actions in Australia are underway

One of the most enthusiastic reports is from Australia, where Rowan Little, General Manager of Montague, explains: “In general, this season’s harvest has been one of the best of recent years, thanks to a cooler-than-normal summer and above-average rainfall, factors which produced high quality, good-sized fruit. Kissabel® has been no exception. At our new Bill’s Orchard Gate store, not far from Melbourne, we tested the new apples with the local community and organised orchard tours. Feedback was positive in all areas: people were enthusiastic about the coloured internal flesh. We’re also organising an intensive marketing campaign: we’ve produced consumer information material, with a real educational campaign in our store, free packs for the media and customers, and professional photographs for use on the social media networks.”

In South Africa, flowering was later due to the cooler weather, leading to unexpected production peaks.

“Overall, this year flowering was almost a couple of weeks later than the previous year, so cropping was also postponed,” Tanith Freeman, Product Development Manager of Dutoit (South Africa), informed us. “However, the later varieties were on schedule, so we found ourselves facing production peaks. In fact, the ripening period varies across cultivars. In South Africa, the red-skin varieties are best suited to the terrain, while the yellow or orange-skin cultivars tend to ripen more quickly. We’re still in a pre-commercial phase for these new varieties, but we believe the prospects are excellent, and we’re actually planning sales tests in Western Cape province. This will give us important pointers to the potential clientele.”

The production season has also come to an end in New Zealand, Chile and Argentina, where the Kissabel® cultivation trials are promising.

Paul Paynter, General Manager of Yummyfruit (New Zealand), explains: “This is our second trial year. We still have to verify the characteristics of some varieties, but in general we believe the Kissabel® programme is a winner, especially the red cultivars.”

Riccardo Gatti, Production Manager of Unifrutti (Chile), adds: “All the Kissabel® varieties are very attractive, with a glossy intense red colour for the “rouge” and bright orange-yellow for the other varieties. Compared to past seasons, the flesh colour is also improving.”

“2021 has therefore been an excellent year for Kissabel® varieties in the Southern Hemisphere”, concluded Emmanuel de Lapparent, IFORED Manager. “The IFORED programme is now moving on to the next step with the first commercial plantings planned in Chile and Australia, our confidence further increased by the great results from the last European Kissabel® campaign. We are enthusiastic about the outlook for the future!”

Kissabel® is the brand that identifies the different varieties of coloured-flesh apple – from pink to intense red – developed with the aid of exclusively natural breeding techniques by the IFORED programme, an international partnership involving 14 of the world’s largest production and marketing companies.