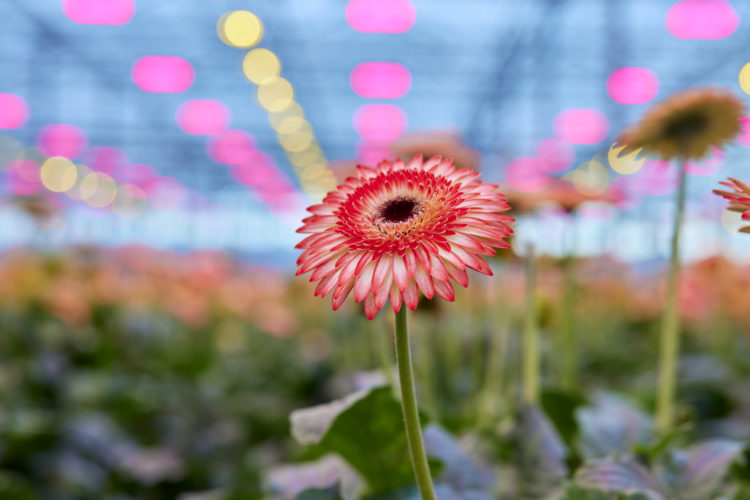 Florein Gerbera’s from Naaldwijk in The Netherlands has significantly raised the light levels in a 1,1-ha greenhouse by replacing half of the HPS lights by Philips GreenPower toplighting force modules from Signify, the world leader in lighting. The new lights boost light levels to 270 µmol/m2/s from 180 µmol/m2/s while maintaining the same energy usage as before. “Quality is our trademark, and the extra light increases both the quality as well as the winter production,” said Reinier Zuidgeest, director/owner of Florein Gerbera.

The company grows 38 different varieties of gerberas on a surface of 3,5 ha, mainly for the appealing Russian market. Zuidgeest has been using grow lighting since 2003. In 2019, he was one of the first gerbera growers to invest in hybrid lighting. Back then that was on 1 ha. Now, on a slightly bigger area, half the HPS lighting has been replaced by Philips GreenPower LED toplighting force grow lights.

“We were one of the first to order this new module in the spring,” says Zuidgeest. “Horti LED Partner Stolze has installed them in October. What appeals to me is the very high output of 3.600 µmol/s. That is twice as much as an HPS, while using the same amount of energy. Besides that, the module fits in the system seamlessly. We have been using it for a month now, and we are very satisfied.”

In consultation with Signify’s plant specialists, Zuidgeest chose a red/blue spectrum. He intends to switch to full LED for the upgrade of the remaining 1,5 ha cultivation surface. “That will need to include white light,” he remarks. “The energy efficiency will be slightly lower but will still be higher than hybrid lighting. You need some white light to assess the flowers, and it is more pleasant for our employees.”

Continue to expand the offer

Udo van Slooten, Signify’s Business Leader Horticulture LED Solutions confirms that full LED has the future. “Different crops are already making the transition. If the energy prices remain high, this will most likely speed up,” he expects. “Our high quality grow light systems offering is bigger than ever, thanks to our consistent investments in research and development. That is an absolute must if you want to cater to pioneers like Zuidgeest.”