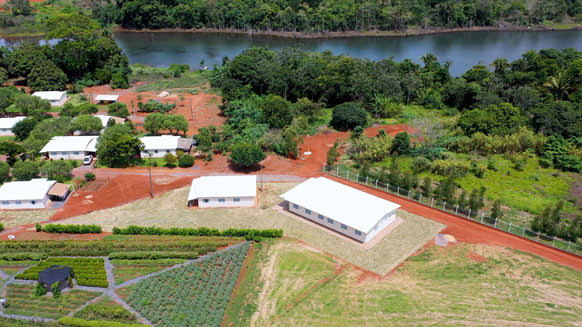 Its official name is Ceratina (Ceratinula) fioreseana, which is now one of 38 known bee species within the Ceratinula subgenus located throughout the Americas / This new species does not live in colonies or produce honey, but it belongs to a group of important pollinators

A new solitary bee species, known as the Ceratina (Ceratinula) fioreseana, has been discovered on a Bayer ForwardFarm in Água Fria de Goiás, Brazil.

The new bee species was first identified by Favizia Freitas de Oliveira, a research scientist with the Institute of Biology at Brazil’s Federal University of Bahia and Hebert Luiz Pereira, a Bayer consultant who’s firm, HP Agroconsultoria focuses on bee production and conservation. In 2017, both began working with Henrique Fiorese, whose family owns the Nossa Senhora Aparecida Farm, where the discovery was made. Details surrounding the discovery were featured in the December 23, 2020 edition of ZooKeys Journal, an international science publication.

Through Bayer’s ForwardFarm initiative, the company collaborates with independent farmers like Fiorese in locations throughout the world to share knowledge about modern and sustainable agriculture through first-hand experiences. Pereira and Freitas de Oliveira noticed the new species, which is a solitary bee that does not live in colonies, while studying other bees that were building their nests inside insect hotels that had been installed on the property by Bayer, as well as living in nests located in thick wooded areas within the farm’s nature preserve and its vegetable gardens.

“We collected some (female and male) specimens in the field survey,” said Freitas de Oliveira. “In addition to these, we identified 72 other species of native Brazilian bees during a rapid assessment to monitor pollinator diversity around soybean crops.”

The new Ceratina fioreseana bee is a member of the Ceratina (Ceratinula) subgenus, which occurs with 38 species in the Americas, 15 of which are found in Brazil. As a solitary bee, it lives alone, does not produce honey nor does it have a queen, however it belongs to a group of important pollinators for plants and crops. It is identified by its distinct facial and body parts including the unique pattern of spots on its face, its honey yellow legs and its male genitalia – which is different from similar species within the genus. The bee was named after the Fiorese family who owns the farm where it lives.

“This discovery reinforces the harmonic coexistence between agriculture and the bee population,” said Cláudia Quaglierini, Tropical Intelligence Manager for Bayer. “Through this partnership, we could see that taking good agricultural practices into account, we are able to verify the diversity and productivity of pollinators that have existed on the farm for more than 30 years. In fact, bees can bring better productivity results through pollination.”

Five to eight percent of food grown globally depends on the pollination of insects, among them bees. Freitas de Oliveira said the research which led her to discover the new bee species also provided key data, through observation, on the relationship between bees, plants and sustainable agriculture.

About Bayer
Bayer is a global enterprise with core competencies in the life science fields of health care and nutrition. Its products and services are designed to benefit people by supporting efforts to overcome the major challenges presented by a growing and aging global population. At the same time, the Group aims to increase its earning power and create value through innovation and growth. Bayer is committed to the principles of sustainable development, and the Bayer brand stands for trust, reliability and quality throughout the world. In fiscal 2019, the Group employed around 104,000 people and had sales of 43.5 billion euros. Capital expenditures amounted to 2.9 billion euros, R&D expenses to 5.3 billion euros. For more information, go to www.bayer.com.
Find more information at www.bayer.com.
Share 0
Tweet
Share 0
Share
Share