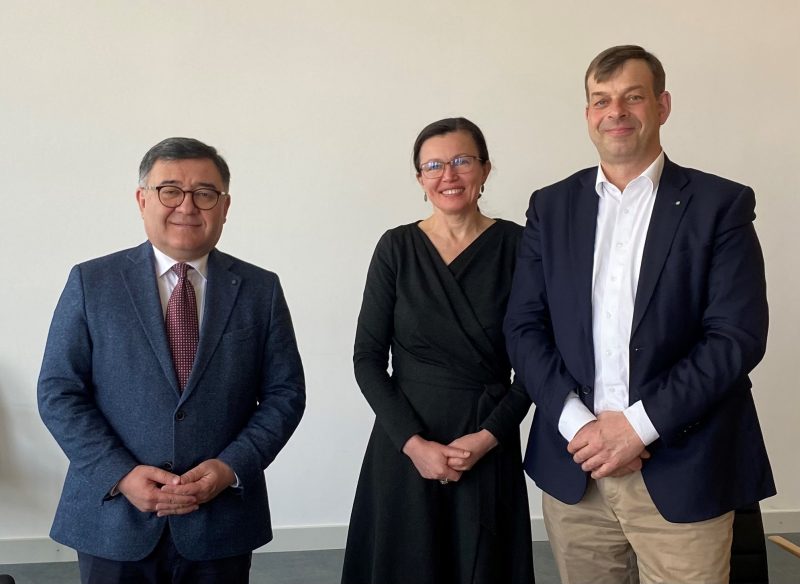 Last week on 27 April, the Ambassador of the Republic of Uzbekistan, H. E. Amb. Nabijon Kasimov, visited DLG’s headquarters in Frankfurt, Germany, to discuss potential joint agricultural projects between Uzbekistan and the DLG (German Agricultural Society), including cooperation in the areas of training, transfer of expert knowledge, standardization and certification, establishment of seed breeding, development of agricultural machinery production and an educational center for Uzbek farmers.

At the meeting in Frankfurt, Ambassador Kasimov emphasised the importance of the continued professionalizing of the animal husbandry and development of aquaculture in Uzbekistan over the next years. With its non-profit aim to promote and share know-how in these practical areas, the DLG could be an important contributor of knowledge.

Young people make up 60 percent of the population
In his presentation of Uzbekistan, the ambassador underlined that the country not only is one of the most populous countries in Central Asia but also has a high percentage of young people.

More than 60 percent of Uzbekistan’s 34.6 million population are now under the age of 30. There are advantages to such a population structure, which then comes with obligations on the part of the Uzbek government to create new jobs and train young people. Agriculture and agribusiness will play an important role.

Transforming agriculture from state to private structures
With a share of 27 percent of the gross domestic product (GDP), Uzbek agriculture plays an important role in the overall economy. Over a quarter of the workforce is engaged in agriculture, with the majority active on small farms run as a side business consisting of small livestock herds, producing milk, meat, eggs and wool, primarily for private consumption. Over the past five years, the Uzbek government has initiated reforms designed to transform agriculture from state to private structures.

The aim is to professionalize animal husbandry through the use of modern genetics and production methods. Part of that strategy has been the introduction of value chains that are mapped in logical cluster systems.

In the livestock sector, for example, a meat and dairy cluster was launched in the Jizzax province in 2019, applying modern genetics, production methods and a consistent feed system. However, given the local natural conditions and the scarcity of water, this poses enormous challenges. Against the background of water scarcity in Uzbek farming, ambassador Kasimov expressed an interest in visiting the DLG’s International Crop production Center in Bernburg, Germany, a 600-hectare site conducting long-term irrigation trials among others.

The scarcity of water pose significant challenges
The uncontrolled water consumption, especially for cotton cultivation in Soviet Union times, led to an ecological disaster in the Aral Sea basin. The ambassador reported that up until a few decades ago, the former port city of Muinak was located on a peninsula at the southern end of the Aral Sea.

Developing aquaculture
Today, the shore is about 80 km away from the city and many fish processing plants have been shut down. Today, the Uzbek government is looking at ways to develop aquaculture in the country to provide raw material for fish processing.

From animal husbandry, feed production to aquaculture, the delegation participants agreed that trade fairs like EuroTier, which focuses on methods for livestock and aquaculture production, provide an excellent platform for information and the exchange of experiences.

About DLG
Headquartered in Frankfurt, Germany, the DLG strives to increase professional knowledge in agriculture across borders, its objective since the society was formed in 1885 by visionary and engineer Max Eyth. With over 30,000 members today, DLG is a politically independent and non-profit society with membership open to all. Drawing on a network of experts with international expertise as well as subsidiary companies in 12 countries.