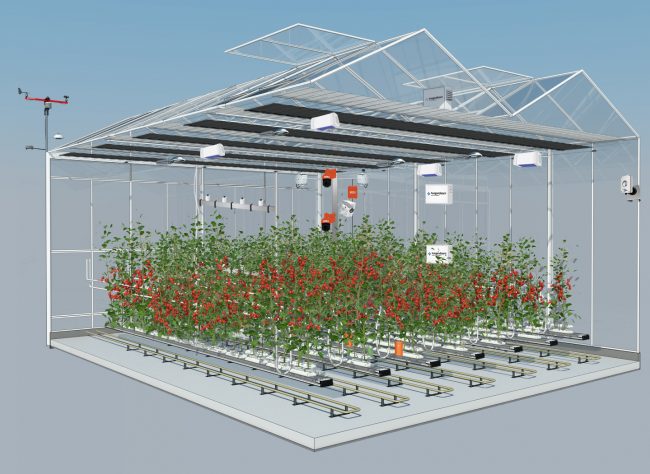 An optimized growth climate is essential to optimize crop growth. According to the principles of Plant Empowerment, crop growth is determined by the three plant balances. Therefore the greenhouse climate needs to support the crop to keep it’s balances in balance at all times. Team AuTomatoes used the principles of Plant Empowerment in their growth strategy during the Autonomous Greenhouse Challenge. They won the Challenge because they focused on the plant and it’s balances when developing their algorithms and solutions for growers. So how did they do this?

According to Silke Hemming, Head Scientific Research of Team Greenhouse Technology at Wageningen University & Research (WUR), who is considered the driving force behind the competition, also indicated Plant Empowerment was a strong element in the strategy of team AuTomatoes. “Centering all actions around the plant, that is what growing a crop is about. When you find a balance between the growth factors your crop performs well. And up until today, a well performing plant has always brought more income then costs for the resources you put in.”

Various algorithms were developed to support the plant balances. For example the Irrigation Optimization algorithm that stops irrigation in time to reach the desired amount of dry-back after a certain amount of time. The AI model makes sure that the crop receives the optimal amount of water, while at the same time it avoids saturation of the slab during periods with little or no light, to maintain all beneficial parameters, such as oxygen and microorganisms.

In addition to these algorithms team AuTomatoes also developed a new sensor, called the Light Penetration Ladder. This sensor measures the amount of light in the greenhouse at three levels: at the top, middle, and bottom of the crop. These measurements provide insights in the actual amount of light that is penetrating the canopy, and is received by the leaves on different levels in the crop. This can be used as the base for your leaf pruning strategy.

Do you want to know more about the Data Driven Growing strategy team AuTomatoes applied to win the Autonomous Greenhouse Challenge? Subscribe to our newsletter, or follow us on LinkedIn and Instagram, and be the first to find out!