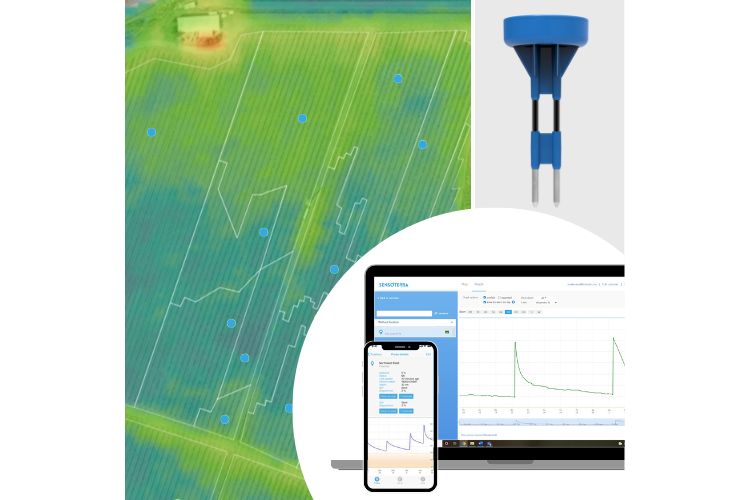 Soil is the basis for agricultural management, and water is of vital importance to plants, not only as a building material, but as a transport medium of nutrients to the plant. But plants are not the best at utilizing water, only 1% of water that is taken up is converted into biomass. Therefore, it’s important for soil to maintain the functionality of water storage and supply for optimal plant growth.

Soils are natural drainage systems, which ensure aeration and adequate supply of oxygen and other nutrients to plant roots and soil biodiversity. When exposed to excess water, these drainage systems work to move water through the soil levels to the groundwater table – while undergoing periods of drought, plants will have to survive on water reserves built up in wet periods. This is why monitoring soil moisture is so important, not only for plant health but for soil viability as a resource for agricultural management.

Soil is the variable

There are multiple activities which influence a soils’ water holding capacity and can therefor influence the moisture values derived from monitoring tools. Key factors influencing soil moisture are:

It’s our belief that in order to have a complete picture of water behavior within a soil, more datapoints are necessary across a field, rather than just one centralized location.

How many sensors do we need on our farm or project?

Unfortunately, there is no ‘golden rule for the number of sensors per hectare’, but from practical experience we know that a good total picture can be derived from some cleverly placed sensors.

Based on the above factors and years of experience in field, we have developed a couple or rules-of-thumb:

Of course, in very large areas It might not be economical to place one sensor per hectare or even one per 2 hectare. In these cases, we advise to split up the terrain or project in ‘zones’ with similar characteristics. A good way to identify these areas is by integrating moisture data from satellites.

By the way, it is often thought that satellite data competes with sensors. We think satellite data is extremely useful and should be used, but it does not provide the insights of real time measurements in the root zone of the plants. Hence the data should be combined, to get the best insights to support decisions.