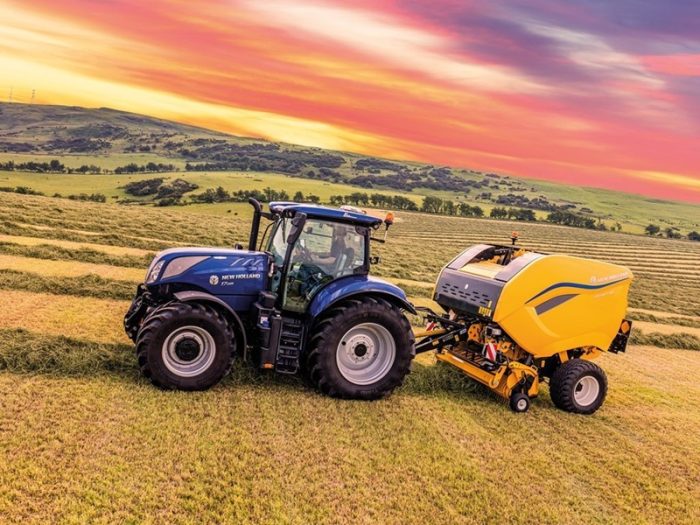 New Holland extends its Big Baler Plus range to five models with the introduction of the new 120 x 70cm-section BigBaler 1270 Plus Density, which complements the existing BigBaler 1270 Plus. The baler has been restyled to match the new styling introduced on the flagship BigBaler 1290 High Density. It features re-engineered and upgraded components to produce bales with up to 10% greater density than the BigBaler 1270 Plus.  This means fewer bales per field for the same crop amount, reducing the cost for farmers and contractors to handle, transport and store bales.

Designed to pack more material into each bale flake with every stroke, a reinforced plunger leads the way. Upgrades mean it is capable of 27% greater force than the unit on the BigBaler 1270 Plus. To match the increased material feed supplied by the upgraded plunger, bigger density hydraulic rams deliver a 113% force increase (more than double) on side density doors and 25% more force on the top doors than those on the BigBaler 1270 Plus. This ensures that the bales are compressed to the highest possible level. In addition, the tension rails feature side density doors with increased stiffness, while the top density door incorporates a heavy-duty top-beam. The bale chamber compression system also features two density levers pushing the side doors, ensuring equal force distribution on the doors. Wear plates on the bale chamber floor and front sides are standard equipment on Plus Density units to maximise durability and minimise cost of ownership.

The BigBaler 1270 Plus Density uses the same award-winning LoopMaster™ knotting system as all other BigBaler models. This makes the second knot in a loop style, resulting in an increase of up to 26% in overall tensile strength for reduced breakages compared to a standard double knotter. It also eliminates twine offcuts, potentially saving 6km of twine waste in the field in a 10,000 bale season. The new model is available with both Packer and CropCutter version with a short cutting length of 39 mm.

Laurent Libbrecht, New Holland Head of Crop Production & EU Driven Hay & Forage Product  Management said “New Holland has been putting the ‘big’ into big square baling for over three decades. This product is the most efficient large square baler in the “120×70 cm” segment, capable of a higher density and suitable to produce perfect shaped and stable bales. The IntelliCruise™ system grants great capacity during all-day baling. It truly represents a step further in baling, both for its features and for its design.”

Upgrades across the BigBaler range

New Holland is also upgrading its other Big Baler Plus models to adopt similar styling to that of the flagship BigBaler 1290 High Density and the new Big Baler 1270 Plus Density. In addition to the new ‘Natural Flow’ styling, new Plus model features include a Hardox bale chamber wear plate option to prevent excessive wear in extreme conditions, and new twine disc cleaner plates to prevent crop build-up on the Loop MasterTM knotters. All New Holland BigBaler models now meet the Agricultural Industry Electronics Foundation (AEF) ISOBUS conformance tests, and are certified for UT and TC-BAS functionality, allowing operation via ISOBUS by a range of tractor makes.

New Holland Agriculture extends its variable chamber round baler offering with the new Pro-Belt Series. This premium round baler is a versatile, high-performance and durable baler that delivers excellent bale shape in all crops and conditions.   It has been developed to meet the specific needs of contractors and farmers who clock up a high annual use of their balers. Its dependability is a key success factor for them, as it performs equally well when the harvesting windows are anticipated or postponed. It stands out for its exceptional productivity in all crop conditions, delivering high bale density that helps maintain the nutritional properties of the freshly harvested crop.

The new baler has been developed for reliability and durability, with a split gearbox for high mechanical efficiency and robustness and a streamlined design with fewer, stronger components and moving parts. The heavy-duty 520 mm-diameter rotor in combination with the active drop floor provides constant feedback to the operator, enabling them to maximize productivity with high throughput and non-stop feeding. It performs equally well in silage and dry straw, producing consistently high bale density and perfectly formed, firm bales for easy handling and stacking. With a capacity up to 30 tons per hour and 140 kg/m3 in straw, the Pro-Belt will enable customers to bale their crop faster, finishing their field in less time with fewer bales.

Round baler ranges upgraded with new features and styling

The New Holland Roll-Belt range adopts the new ‘Natural Flow’ styling of the recently launched Roll-BarTM and Pro-BeltTM ranges. In addition, the Roll-Belt and Roll-BarTM ranges now feature an upgraded version of the Bale Command™ II Plus monitor that delivers enhancements on diagnostics and tracking of daily activities, maintaining the ease of use that is its hallmark.