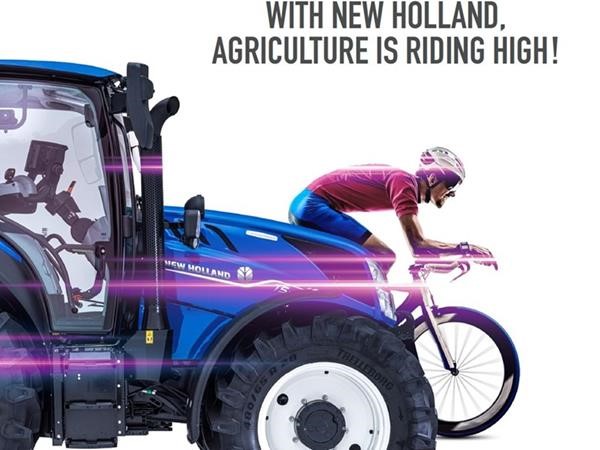 New Holland Agriculture announced recently that it will be official sponsor of the Giro d’Italia 2022. The brand will accompany the world’s best cyclists on the roads around and beyond Italy as they tackle the 21 stages of the first Grand Tour of the year.

“We are very excited about this sponsorship. New Holland is known for its widespread network and close relationship with its customers, and with this collaboration, during the three weeks of the  Giro  d’Italia,  we  will  be  alongside  the  many  fans  and  rural  communities  who  follow  the competition with passion. We will join them on the roads around the country, supporting together the best cyclists in the world as they make their way in the cities and across the countryside.” stated Sean Lennon, Vice President Europe New Holland Ag.

The Giro d’Italia is one of the prestigious annual three-week-long Grand Tours and is usually the first to be run in the year, followed by the Tour de France and the Vuelta de España. Now in its 105th year, it made its debut in 1909. The 2022 edition is set to start in Budapest on May 6 and continue in Hungary for the first three stages before heading for Italy. The Italian Grand Tour will finish on 29 May, when the riders will have completed the 21 gruelling stages.

“The sponsorship of the Giro d’Italia is a perfect fit for New Holland.”  added Carlo Lambro, New Holland Brand President, “Very importantly, it shares with New Holland the values of power, innovation, determination, passion and sustainability that are at the heart of everything we do. Through this collaboration with a sporting event that has such an extensive following across the world, with many fans in the farming communities, the New Holland brand will achieve great visibility for the innovation, advanced technology and performance it offers to customers.”

Matteo Mursia, Sales & partnership Director of RCS Sport said “We are very proud to announce the partnership with New Holland. The Giro d’Italia runs through the Italian countryside and passes by many rural locations and it is an ideal platform to give visibility to Italian excellence, its industrial districts and a prestigious and historic brand such as New Holland.

A great sporting, social and cultural event that loves to share with its partners values such as passion, emotion, joy, effort, while also paying attention to the environment, sustainability and the people”.

In the run up to the Giro d’Italia, New Holland will invite its customers, dealers and employees to participate in a rich programme of initiatives and communication activities linked to this popular sporting event.