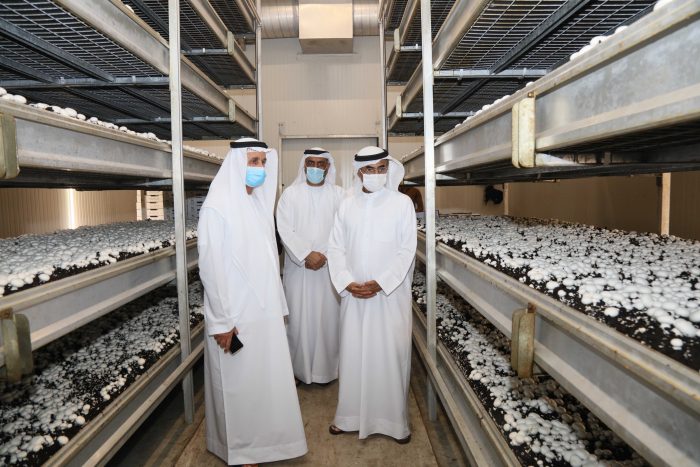 Accompanied by His Excellency Sultan Alwan, Acting Undersecretary at the Ministry of Climate Change and Environment (MOCCAE), His Excellency Dr Al Nuaimi in conversation with the Emirati farm owners, assessed the support that MOCCAE provides to the agricultural sector, specifically to modern farms. He also emphasized the Ministry’s role in creating markets for local produce through collaborative partnerships with major retailers to sell agricultural products grown locally across their chain of stores and supermarkets.

Furthermore, the Minister stressed that the UAE prioritizes the use of agricultural technologies that increase crop production and quality and reduce the environmental footprint of farms across the country. He pointed out that MOCCAE endeavors to strengthen its partnership with major modern farms in the UAE to develop the sector and highlight these farms as successful examples of agri-tech at work.

Notably, Themar Al Emarat hydroponic farm is the largest mushroom farm in the UAE, producing nearly six tons of mushrooms daily for local consumption and export. The 190,000 sq m farm relies on solar energy for 50 percent of its power requirements, and recycles 100 percent of its irrigation water. It also reuses the soil in its hydroponic system as agricultural conditioner in traditional cultivation.

Meanwhile, Alayas Farm produces two tons of green fodder that are used as feed for its goat and poultry livestock. It also leverages hydroponics in cultivating vegetables.

Following the visits to the two farms, His Excellency Dr Al Nuaimi toured Al Awir Falcon Center, where he highlighted the various services offered by MOCCAE and their importance to falcon owners and breeders.