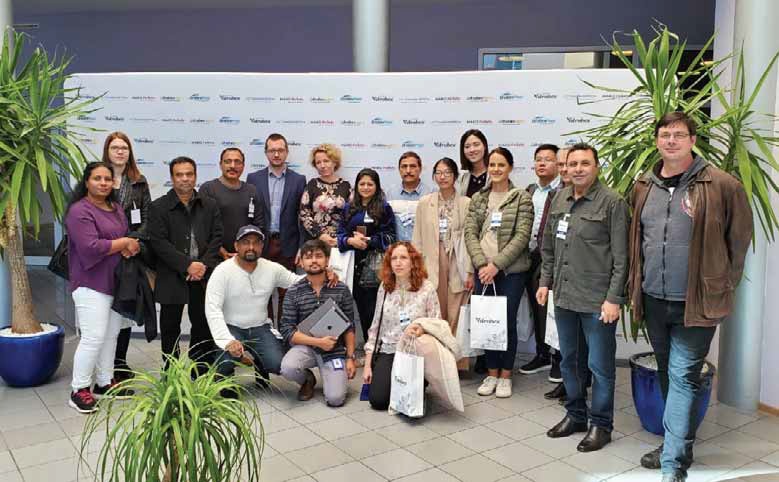 POLAND’S AGRICULTURAL SECTOR IS VITAL FOR EUROPEAN AND GLOBAL MARKET

Since the beginning of 2019, an upward trend in the export of agri-food commodities from Poland has been continued. The export value of agri-food commodities in the period of January-June 2019 amounted to EUR 15.4 billion and was by more than 8% higher than the year before. Also, the import was at a level of EUR 10.4 billion, by about 5% higher. As a result, the positive trade balance increased by around 17% to EUR 5.0 billion.

In order to familiarize with Polish vibrant agricultural sectors and the highest quality of Polish agri products, a group of journalists from around the globe were invited to participate a special Food and Beverage Media Mission to Poland organized by Polish National Support Centre for Agriculture (KOWR). The event was held during the International Trade Fair for Food – Polagra Food 2019 in Poznan from 30th September to 3rd October 2019.

Gulf Agriculture Magazine’s Associate Editor Jessie Jorge was one among the few journalists selected to cover the event from the United Arab Emirates. The Slawkowo farm is a family farm focused mainly on plant production. Cereals are grown on more than 1,000 ha of land, as well as rape, corn, potatoes, sugar beet and vegetables (onions, beetroot).

The current owners – Andrzej and Romuald Wisniewski (father and son) first, in 1994 leased a farm from the Agricultural Property Agency of the State Treasury over 500 ha to buy it in 2000 and start modernizing the plant so that both buildings and equipment could be adapted for modern methods of crop production and harvesting.

In subsequent years, the area of the farm more than doubled, hence further investments, mainly construction, to adapt warehouse space to the current area. Currently, the owners have at their disposal a modern storage room and a cold store for vegetables.

New warehouses, garages, workshop, etc. were built. They also have comprehensively equipped equipment and devices for soil cultivation, as well as plant care and harvesting, including grain harvester and vegetable harvester.

The owners are eager to cooperate with agricultural companies, including Bayer CropScience, Dalgety Agra Polska, Whbc Poznan, Agro-Sieci Sp. z o. o. Chemirol Sp. z o. o., conduct experimental plots, organize trainings and demonstrations. They closely cooperate with Nordzucker Polska SA – Plant in Chelmza, and thus, starting from 2011, every two years they coorganize Sugar Beet Day on their farm. In subsequent investments, they effectively used the tools of the Common Agricultural Policy – EU funds, so that at the moment the characteristic feature of the farm is modern buildings, equipment and what is worth emphasizing exemplary order.

The Europejskie Centrum Owocowe Sp. z o.o. (E.C.O. Grupa), is a fruit growers’ group with a total orchard area of over 1,700 hectares of crops, and with more than 50,000 tonnes of annual production. The group is one of the largest producers and distributors of fruit and vegetables in Poland. E.C.O. Grupa cooperates with the largest retail chains and individual recipients in 11 foreign markets.

The group is located in the heart of Europe’s largest apple-growing area, first-class technical support and many years of trading experience E.C.O. Grupa meets the highest quality standards.

E.C.O. Grupa has one of the biggest in Europe production lines for peeling and cutting apples with the capacity of 40.000 kg a day. The production process is supported by the professional management system and verified team of qualified workers.

Torunskie Pierniki® is a unique product manufactured only in the Confectionery Factory “Kopernik”. Strictly guarded, traditional recipes (the technique of dough kneading, a rich mixture of natural spices) make it an exceptional product whose tradition has been continued for over 700 years in town.

Katarzynki® is the most recognizable shape of Torunski Piernik®. Katarzynki®’s unique taste is the result of using the largest amount of spices and specially kneaded, fat-free dough.

Wafel Teatralny® (Theatrical Wafer) has been produced in the Confectionery Factory “Kopernik” for over 60 years, achieving cult status. Its secret lies in the extraordinary, crunchy wafer leaf, which is strictly guarded recipe (that has not changed since its beginnings). Adored by generations, now it is available in three flavours – classic nut, chocolate and lemon.

The factory is also famous for manufacturing very crisp and light wafer leaf. Wafers produced in the Confectionery Factory “Kopernik” have been enjoying unflagging popularity for decades. Drobex Company based in Solec Kujawski has been known for past 30 years in food industry as one of the leading manufacturers of pristine quality poultry meat and its derivatives.

The history of Drobex goes back to 1963 when four Frischke brothers began farming broiler chickens. In 1987, they launched an abattoir under the name of P.D. Drobex. Gradual growth and expansion of product range offered by the business resulted in creation of vertically integrated consortium of companies under one common name Drobex.

This family business is currently one of the leaders of the Polish and EU market. Products manufactured by Drobex are very popular amongst consumers and are available through the largest retail chains in the country. They are available in KFC Restaurants both in Poland and Western Europe.

Drobex Group consists of closely integrated businesses focusing on production of hatching eggs, chicks, compound feeds, broiler fattening, slaughtering, cured meat production, meat packaging, and distribution of fresh or frozen chicken meat. Due to structure of business we remain in full control of quality and have capacity to trace each batch of product indulged by the consumer.

The prime objective of Drobex is to manufacture safe, healthy and tasty food, fulfilling the needs of consumers. Spóldzielnia Mleczarska Mlekpol is the biggest producer of milk and dairy products in Poland. For years, the company has been an undisputed leader in the Polish dairy industry and one of the twenty largest raw milk processors in Europe. In 2018, Mlekpol has exceeded the purchase limit of 1.83 billion litres of milk. This is an average of over 5 million litres of milk a day from nearly 9500 producers. More than 30% of SM MLEKPOL’s products is exported to Europe, Africa, Asia, South America and the Middle East.

Laciate is the most recognized brand of milk in Poland. The brand was established in 1995 and immediately gained consumer recognition. It has the first shelf-stable milk (UHT) in Poland – still the leading one in this category. Laciate products are made of the highest quality raw material from cows grazed on the cleanest Polish meadows. Laciate is synonymous with naturalness, freshness and top quality.

Due to the growing demand for UHT milk export beyond the European market, MLEKPOL creates new brands with their image and descriptions tailored to the needs of individual markets. Less than 2 years ago, a new product – milk branded as Milcasa was created. This unique milk created with passion not only has become increasingly popular but its merchandising has been growing dynamically, e.g. in China. As all Mlekpol products, it is produced in the purest region of Poland – in Masuria, Warmia and Podlasie – the areas that are called “green lungs of Poland”. Its unusual and mild taste has been developed in stateof- the-art production facilities, in line with global standards for production, cleanliness and safety. Milcasa is a highly valued brand by foreign buyers already in 60 countries around the world.