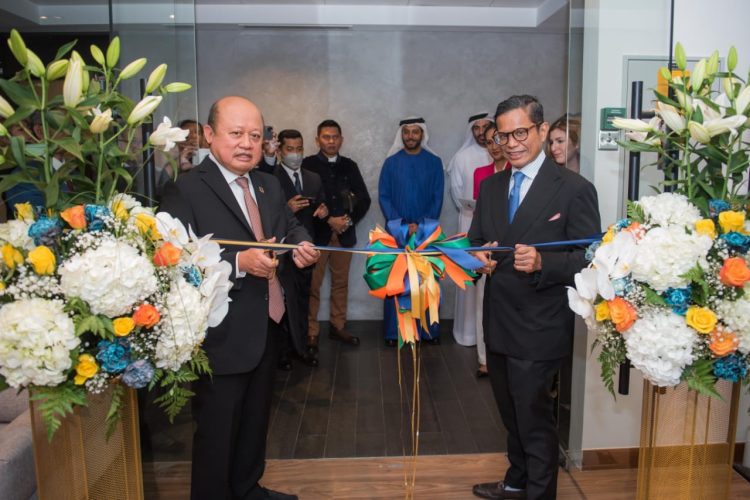 In his remarks, the First Deputy Minister of State-Owned Enterprise of the Republic Indonesia, Pahala Nugraha Mansury,  stated that Pupuk Indonesia as the largest fertilizer producer in Asia plays an important role in the world fertilizer trade. In 2022, Pupuk Indonesia is predicted to achieve a revenue value of USD 6 billion or a two-fold increase in the last five years.

Pahala further stated that the opening of a representative office in Dubai by Pupuk Indonesia is a very strategic step because there are three initiatives that Pupuk Indonesia will develop in the future. “The first one is making sure that they have operational excellence, including supply chain efficiency. The second is about food security and optimization, where fertilizer becomes one of the key success factors to have a better food security. The third, we also believe that Pupuk Indonesia can also become one of the producers of the products related with the green and circular economy, such as through green ammonia, green hydrogen, or in the mid-term include blue ammonia and blue hydrogen,” Pahala explained.

At the same event, Pupuk Indonesia also signed an MoU with Fertiglobe, the largest producer of nitrogen fertilizers in the Middle East and North Africa (MENA) and largest seaborne exporter of ammonia and urea globally. Fertiglobe is a strategic partnership between OCI N.V. and the Abu Dhabi National Oil Company (ADNOC) and is listed on the Abu Dhabi Stock Exchange. This MoU shall allow Pupuk Indonesia to potentially utilize Fertiglobe’s global distribution business to facilitate the placement of its ammonia and urea product

The President Director of Pupuk Indonesia, Bakir Pasaman, stated that this representative office will carry out several roles, such as ensuring seamless and reliable communication with current partners, suppliers, and future clients, and serving as a trading arm to expand the company’s trading business to the international market. The Dubai office will further ease the company’s access to the purchase of raw materials, especially for NPK fertilizer, and enable future collaborations with technology and manufacturing companies located in the UAE, and which will support Pupuk Indonesia’s trading business moving forward.

As one of the largest producers of ammonia and urea in Asia, Pupuk Indonesia has more than 50 years of experience in producing and exporting ammonia and urea made possible through complete facilities, hence offering quality products.

In 2021 alone, the export volume of Pupuk Indonesia reached around 2 million tons of urea and 715 thousand tons of ammonia. Pupuk Indonesia also produces and exports other products such as NPK and ZK. “Especially with the UAE, we have partnered for the purchase of a large quantity of sulfur that was produced by the UAE and is needed for the production of sulphuric acid,” added Bakir.

“In line with the instruction from our Minister of State-Owned Enterprise for Pupuk Indonesia to go global, we are expanding our businesses by getting closer to the international market and continue seeking other business opportunities, especially in the commodity trading sector,” Bakir explained when inaugurating the representative office of Pupuk Indonesia as the Dubai International Financial Center (DIFC), Monday (31/10/2022). The establishment of this office is aimed at improving the company’s cost efficiency, increasing its’ EBITDA uplift through business development by increasing the number of sales through Cost and Freight (CFR) and Cost Insurance Freight (CIF). These are possible due to Dubai’s position as one of the hubs of the world’s leading logistic companies.

Dubai itself was chosen for its reputation as one of the best cities in the world in terms of ease of doing business. Its’ strategic location also fits perfectly with the company’s requirements considering its’ proximity to European countries such as Russia and Belarus, African countries such as Egypt and Morocco, and Asian countries such as Jordan, India, and China.

“In the future, we are targeting this representative office to grow and scale up into a trading company that can provide an EBITDA uplift to the Pupuk Indonesia Group,” said Bakir.