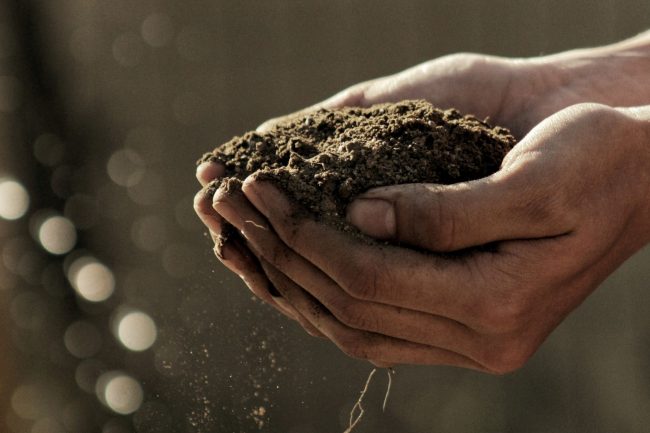 IN ORDER NOT TO LOSE GROUND: SOIL PROTECTION AND HUMUS MANAGEMENT ARE CORE INTERESTS OF AGRICULTURE

Soil protection is no longer an ecological issue. Climate change and intensive cultivation are also robbing conventional agriculture of more fertile soil year after year. With integrated agriculture, a strategy is currently establishing itself that operates between organic and conventional farming. One of its goals: To preserve and promote fertile soil.
Fertile soil – a finite resource

Without fertile soil, nothing works in agriculture and yet it is under serious threat. Worldwide, we lose 10 million hectares of fertile farmland every year. A quarter of global soils have already been degraded. In Europe, almost half is at least of low quality; poor prospects for sufficient yields.

Help from the soil, for the soil

There is a solution: studies show that the fertility of soils is largely determined by the humic acid content. Humic acids are formed by degradation and conversion processes involving microorganisms. The more inactive these microorganisms are, the less fertile the soil is and the less humic acids it contains. Even soils with a low humus content and a low percentage of humic acids are far from being lost or useless.

Because we can supply humic acids to the soil again. We find highly active fractions in the near-surface layer of lignite, called Leonardite. They are particularly effective and can make a very big difference in heavily used soils.

The importance of humic acids in a fertile soil is paramount. The knowledgeable observer can recognize their occurrence by the dark color of the topsoil. Due to their stable properties, humic acids provide a significantly higher cation exchange capacity. In addition, they have a very diverse and positive effect on the soil system. The influence of humic acids optimizes the soil structure. It is better aerated and water can be absorbed and stored better and for longer. The addition of humic substances also increases the formation of clay-humus complexes and thus stabilizes the crumb considerably. The root system can develop better and root growth is significantly increased. The buffering effect on the pH-value increases the availability of nutrients and favors the living conditions for soil organisms. This stimulates continuous humus formation.

Good soil – important for humans and the environment

Anyone who wants to secure food supplies up to 2030 and beyond and combat world hunger must see our soils as the central starting point, hub and pivot for this. Healthy, fertile soils have the potential to feed billions of people sustainably, healthily and in abundance. Its many other free ecosystem services help us maintain a eco-friendly environment on our planet. It is immensely important to understand the resource soil and the processes that take place in it and to give it the spotlight in society, especially in agriculture, that it deserves.

Humic acid-rich raw materials such as Leonardite and lignite are therefore real sources of hope that can make a very important contribution to a sustainable, prosperous future for humanity.