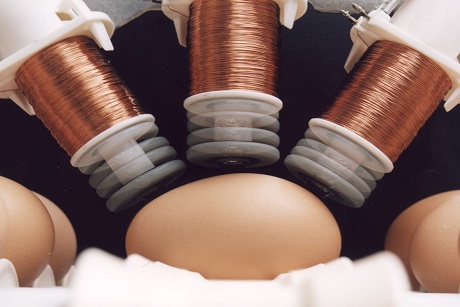 HISTORY AND FUTURE OF CRACK DETECTION

From “candling” to Shell Inspector

One of the most dangerous abnormalities in consumption eggs is cracks in the shell. If the shell is no longer intact, there is a risk of bacteria penetrating the egg and endangering consumer safety. The membranes of an egg are a strong barrier against infection. If both membranes are still intact, in combination with only a micro-crack, the egg may be acceptable in some products, but eggs with bigger cracks definitely need to be removed from the consumption line.

Today in 2019, the majority of automatic egg graders are equipped with automatic crack detection, but still a significant part of the market relies on people manually inspecting eggs, the so-called “candling” process. It is long known that if eggs are sent over a back-lit roller conveyor and the people observing the egg flow are in a relatively dark environment (“candling booth”), it is possible to identify a lot of the cracks in eggs. In white eggs, bloodspots can also be observed. For many decades this was the only option for finding abnormalities in egg packing stations. As volumes increased, this became more and more tedious and hard work for the “candlers”.

Following many studies, Moba calculated that a human candler is not able to identify more than approximately 50% of the cracks. This was measured where one candler handled 45,000 eggs per hour. With the increase of machine capacities over the years, this number is undoubtedly decreasing. That is why over the years automatic crack detection was developed by all manufacturers of egg grading machines, starting in the early 1980s. Vision technology was still immature in those days and the only reasonable way to identify a crack in an egg shell was by “listening”. An intact egg shell will vibrate when impacted, like a wine glass will “sing” when you tap it with your finger.

If there is a crack in the egg shell, no matter how small, the tapping energy will be absorbed, resulting in a duller sound. Just like when a wine glass is broken you will not hear it sing. Basically, there are two methods of creating the impact: one is by actively having a probe impact the egg (tapping) and the alternative is having an egg impact a probe (rolling over). Both have distinct advantages and disadvantages. An active probe needs more technology to create the impact: moving parts that approach the egg shell. When eggs are forced to roll over a sensor, the sensor itself is fixed and is not moving. This makes the technology simpler but also more vulnerable to getting dirty since the sensitive equipment is mounted directly under the egg flow. Furthermore, the “roll-over” effect depends on the speed of the machine and therefore is also influenced by starting and stopping.

And then there are systems using vision technology. Moba was the first to apply vision technology for detecting leakers and remove them via an outlet very early in the process. Vision is ideal for detecting leakers and large cracks, but although systems are getting more and more sophisticated, finding hairline cracks is a challenge for this technology. Moba is actively pursuing the capabilities of vision technology, the difference is that fresh hairline cracks are often hardly visible to the human eye. Every person who works with eggs knows that you have to squeeze an egg a little in order to find hairlines when using a candling light. Here we find a big difference between online and offline situations. When a hairline crack has existed for a while, it becomes more visible, but a newly created hairline crack is hard to find even for the human eye. But when measured acoustically, a broken shell absorbs more energy, no matter if the crack is old or fresh. For that reason Moba is relying on the acoustical principle.

Of all systems on the market today, the “actively driven probe systems” score the best in performance, above 90%, followed by the “roll-over” systems with approx. 70–80%. There are only a few vision systems on the market that claim to do full crack detection and they score no better than the 50% detection level of the human candlers. Looking at all the advantages and disadvantages, Moba opted for detection above the egg flow with magnetic driven probes since this resulted in the combination of the highest accuracy and the least chance of accumulation of dirt, egg liquids or shell fragments on the sensitive measuring devices. This resulted in a detector that never needs a stop for cleaning during production while having a detection level around 90%.

Finding the right technology was not immediately achievable. A problem to overcome is environmental noise; this should barely influence the shell response sound. Next is the fact that every egg is different in size and they need to be tapped at the ideal moment when passing the detector. Moba constructed three systems; the first two attempts turned out to be suboptimal before the third proved to be a real breakthrough.

One of the first attempts used little motors to drive the probes. This was only used on a few machines and never considered a usable system as the noise created by the motors through the rigid mechanical construction did prevent clear data acquisition. This system could not outperform human candlers and therefore never made it to a commercial production. Despite this failure, the system provided great insights about signal behaviour and probe technology. The small metal ball used to create the tapping sound was embedded in silicon rubber and that in itself was usable technology.

The next development resulted in the first commercial version. By using vacuum pumps to drive the probes, a much clearer signal was obtained, resulting in a better detection rate. The same solution of the metal ball in silicon rubber was used as the active tapping element. Since the rubber membrane still prevents the metal ball from vibrating freely, the signal–noise ratio of this system was limited. It was clearly better than human candling but was still not able to detect more than approximately 70% of the cracks. It would have been easy to wonder why there would be the need for even better detection, given the system was already better than human candlers. However, there is a simple rationale. With higher detection ratios within reach, batches of eggs could suddenly be processed that were impossible to grade before. This was one of the contributing factors that enabled flocks to have longer laying periods. At the end of the laying period when shell quality becomes much lower, a higher detection ratio simply enables a packing station to meet the quality criteria of retail and/or legislation for a longer period of time. And this is direct profit. So, the industry wanted more.

Finally, the magnetic driven probes were developed, resulting in the best-performing system on the market today. Since the tap of each individual probe is exactly controlled independent of the speed of the machine or the size of the egg, perfect data acquisition is possible. This technology is unsurpassed under control, for each signal is processed individually. In addition, the metal ball is no longer kept in a silicon membrane but is now held in place by a magnet. On a microscopic level it vibrates almost identically as it would in free air. The resulting signal is almost perfect and therefore high detection ratios of over 90% are within reach, making the equipment almost twice as accurate as a human candler.

On the subject of specifications, in order to express the quality of a detector one should always look at the combination of detection ratio (what percentage of the cracks present are actually found by the detector) and the so-called false reject ratio (what percentage of the incoming good eggs are mistakenly identified as having cracks). A good balance for the industry is a detection rate of 90% with a false reject ratio of 0.3%, a typical operating value for Moba detectors. Sometimes customers want less detection and thus, as a side effect, lower false rejects. Of course, it is possible to down-tune the overall sensitivity of the detector, but a more sophisticated way to deal with this is to use software to arrange sensitivity according to the required product specifications. Moba has developed software that is capable of setting quality per product. All this is happening while the incoming eggs are judged independently of the product quality settings. In this way the operator has the best of both worlds: solid constant monitoring of the flock in an objective way while at the same time retaining the ability to tune and tweak the quality of the outgoing products with high precision.