GrowStream™ – World’s Only Irrigation that talks to the plants

Irrigation increases agricultural yields and outputs and helps to stabilize global food production. The roughly 17% of the world’s cropland that is irrigated produces over one-third of the food and fiber grown globally. Irrigation’s importance in the global food system is expected to increase. Approximately 250 million hectares of land are irrigated worldwide, a five-fold increase relative to the beginning of the 20th century. Water security is a powerful concept that is still in its early days in the field of nutrition. This water crisis is driven by rapid population growth, economic growth, and urbanization that, in turn, increases domestic and irrigation water demands. While water availability is a straightforward physical phenomenon, access is more complex and is shaped by structural and individual characteristics.

Considering its importance for global food production and food security and considering its implications for the quality and quantity of water resources, effective irrigation water management is a global priority. Whether or not current levels of irrigation are sustainable, and whether additional irrigation is possible, clearly depends strongly on the availability of water supplies.

Based on these factors, RDI’s GrowStream™ was developed over the past decade and has been launched globally. It is the only irrigation system that talks to the plants. GrowstreamTM is a precision irrigation system that is driven by mother nature, delivering water when the plant interacts with the system. As a result, healthy, faster plant development occurs, increasing crop yields and leading to food security, while reducing water and energy consumption. The system does not require complex flow/ ET calculations. There’s no electricity or controllers to program. It’s simple to install and maintain. There’s no root intrusion, no clogged or blocked emitters, and the need for hydrozones is eliminated.

What makes RDI GrowStream™ the world’s first PLANT-RESPONSIVE irrigation system is its microporous tube that is installed subsurface near the root zone.  It is made with a unique combination of hydrophobic and hydrophilic components, which holds water in the tubing at a very low pressure, releasing water only by the interaction of plant root exudates with the system. This unique feature of this innovative irrigation technology made it an ideal choice for adoption in many projects across the Middle East, Pakistan, India, Europe, and Africa. 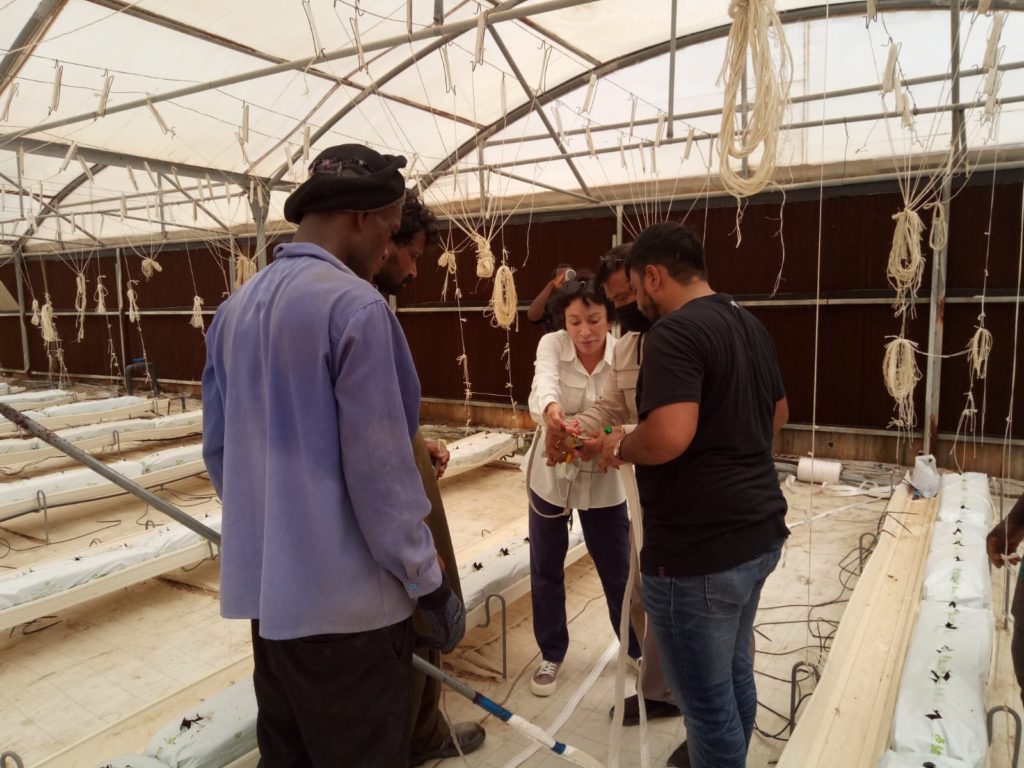 RDI is proud to have initiated some challenging projects in the desert regions of the UAE to convert sandy, non-farmland into arable land that can produce vegetable crops. Beginning with the 5-hectare sweet corn project and a vegetable project of 3-hectares with Alfafa farms in Al Khattim, the project is taking the desert by miracle with the sweet corn growth.

Jan Gould explains, “The power of our plant-responsive technology and our innovation to help plants adapt to extreme temperatures will clearly establish the impact of RDI’s disruptive technology, which will forever change crop production in the desert. For generations, the people living in water-scarce, desert regions have had to diligently work and strive to create productive farmland in the harshest of environments. It remains RDI’s mission to work with people from every country to introduce GrowStream™ to meet increasing food production demands and conserve water, the planet’s precious resource that’s essential to all life.”

RDI has also been involved in system installations with progressive companies in the UAE that are implementing new technologies to increase food production and the quality of produce in the UAE, including installations at Alfafa Greenhouse for 3200 tomato plants, four greenhouse trials dedicated for cucumbers against standard drip irrigation system. The findings and observations showed a fast and steady growth of equal plant height and more fruiting compared to that of other drip Irrigation systems. The installation at Emirates Hydroponics in Al Rahba, growing Baby Rocca using RDI’s GrowStream™ have completed multiple harvesting and plants have showed no water stress and they are beginning to add fertilizer to boost the remaining stalks to have new sprouts. During the entire comparative trial against the standard drip at Emirates Hydroponics, the study concluded based on the length of trial, the germination rate of the RDI GS tube to be 88%, while the SDI is 60%.

In another upcoming UAE project, RDI will be working in collaboration with SILAL to install GrowStream™ in November 2021 at Al Foah Organic Farms in Al Ain, which will have the RDI system installed to irrigate 650 Date Palms in a comparative study against drip irrigation.

These projects will compare RDI GrowStream™ against the leading irrigation technologies, demonstrating GrowStream’s™ ability to transform desert regions to green, crop producing land. As urban areas grow with rising populations, communities around the world must prioritize water-conservation in green spaces to ensure enough water resources are available for the Earth’s growing population.

Jan Gould’s commitment to leverage RDI’s technology for the planet’s future is finally taking shape, injecting much needed hope for a sustainable future for her grandchildren – and their 8 billion fellow global citizens.