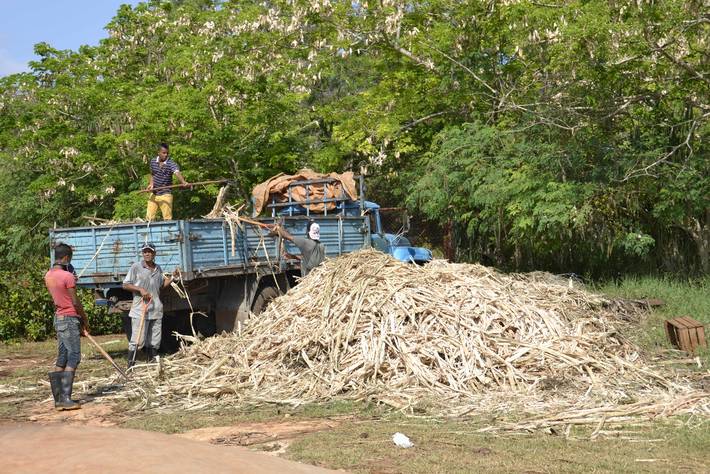 Farmers at work in Cuba.

The Board of the Green Climate Fund recently approved a $119 million disbursement for a FAO co-designed project to boost the resilience to climate change of vulnerable rural communities in Cuba.

The Green Climate Fund will contribute $38.2 million, while the Government of Cuba provides $81.7 million in co-financing for the project, which is expected to help 240 000 people. Announced recently by the Fund’s board meeting in Geneva, this is the first project in Cuba to be supported by the Green Climate Fund.

The seven-year project aims to mitigate around 2.7 million tonnes of greenhouse gas emissions while working with 52 000 family farmers – almost half of them women – and introducing agroforestry practices on 35 000 hectares.

The project titled “Increased climate resilience of rural households and communities through the rehabilitation of productive agroforestry landscapes in selected localities of the Republic of Cuba (IRES-Cuba)” was designed by Cuba’s Agriculture Ministry with FAO’s help in a process coordinated with local populations, civil society and other stakeholders.

The IRES project, which targets food and nutrition security as well as ways to boost the resilience and stability of local food production systems, employment and access to water, will be implemented in seven of the municipalities deemed most vulnerable to the effects of climate change.

“The project is designed to foster the development of inclusive, sustainable and resilient food systems, strengthen the conservation of natural resources, help the agriculture sector adapt to climate change and to improve the resilience of local livelihoods in managing risks,” said Marcelo Resende, FAO Representative to Cuba.

Contributing to sustainability and resilience

New agroforestry and sylvopastoral approaches will be introduced on more than 35 000 hectares in ways that will improve water infiltration and retention in soils, combating erosion and allowing for greater productivity and sustainability in local agricultural ecosystems.

The Government of Cuba and FAO will work with smallholders to change their traditional intensive farming methods into more climate-resilient production techniques. The experience will serve as a pilot project that can eventually be scaled up around the country. The process will also offer a way to provide technical capacity-building assistance for the design of new government incentives to foster broader efforts to adapt to climate change.

“This project is especially welcome as it is the first such initiative in a Small Island Developing State, for which climate change is a significant long-term challenge,” said Maria Helena Semedo, FAO Deputy Director-General, Climate and Natural Resources.

FAO and the Green Climate Fund

IRES is the fourth initiative designed by FAO in the Latin America and Caribbean region that has won approval from the Green Climate Fund.

PROEZA in Paraguay channels $90 million to benefit 17 000 households. RECLIMA, in El Salvador, is a $127 million initiative expected to support 225 000 people. A $63.3 million project in Chile aims to add 25 000 hectares of forest cover in six regions of the country.

Including projects in Kyrgyzstan, Nepal and Pakistan, FAO now leads Green Climate Fund-approved projects with $426.6 million in funding, about half of which come directly from the fund. FAO is also working closely with member states around the world to strengthen their institutional capacity to develop projects the Fund can approve.