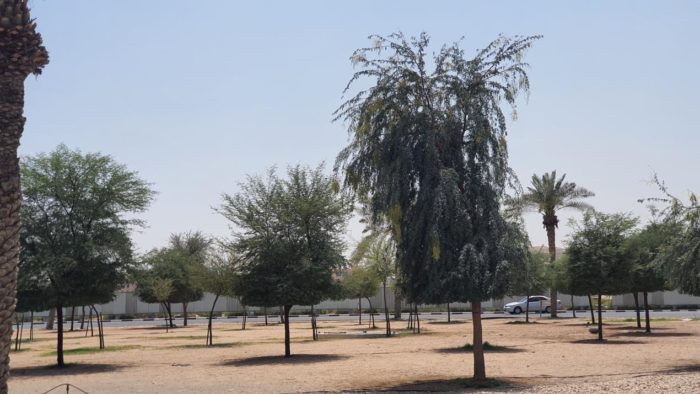 Give a gift of trees this Ramadan, urges Dake Rechsand. Partners with Goumbook’s new sustainability project

Goumbook’s Heritage Forest project is an opportunity for corporates to align with the Middle East’s sustainability goals, says Dake Rechsand.

Dake Rechsand, a Dubai-based company offering sustainable solutions in water conservation and desert farming, has partnered with Dubai-based social enterprise Goumbook, as part of the Heritage Forest project. The first-of-its-kind project in the Middle East encourages companies and institutions to extend Ramadan’s spirit of giving, to the region’s sustainability cause.

Increased participation in greening office campuses, as well as tree-planting drives, could propel the region closer to its green and sustainability goals, the companies appealed. The Heritage Forest, which ties in with the Dubai Agenda 2040, is a multi-stakeholder initiative aimed at reforesting degraded urban, suburban, and desert plots, in the UAE. The initiative will do this using hardy indigenous plant species, by applying innovative planting technologies, and a rigorous scientific monitoring system.

The region’s quest for a sustainable future is becoming increasingly evident in the UAE, which has made a strong case to lead economic revival, through exemplary management of the pandemic, and simultaneous socio-economic reforms. This moment in time presents an ideal opportunity for meaningful contributions to the green agenda, Dake Rechsand explained.

“Many organizations and institutions are showing an increased enthusiasm for socially-conscious initiatives,” said Chandra Dake, CEO and Founder of Dake Rechsand. “For the UAE, issues such as desertification and water scarcity represent an existential challenge. Therefore, in the Ramadan spirit of giving, and creating a better world, we believe there has never been a better time for greening office spaces, or undertaking tree-planting initiatives. The cascade effect of such corporate initiatives often leads to employees taking on gardening, and other sustainable green practices, at home”.

Substantiating Chandra’s claim is a comprehensive study, which notes that one tree absorbs 20kgs of dust and 20 tons of carbon annually, while “swallowing up” 80kgs of mercury, lithium, and lead-based suspensions. In addition, one tree creates 700kgs of oxygen, and purifies 100,000 m2 of polluted air in a year, the study has found.

“In line with the United Nations’ Sustainable Development Goals of creating social, economic, and environmental benefits, all plant species chosen for our Heritage Forests offer specific environmental, medicinal and/or economic benefits,” said Goumbook’s Founder Tatiana Antonelli Abella. “The resulting Heritage Forests are a network of green spaces that take over low-density urban or desert areas, with a mix of indigenous, drought-tolerant tree species and an understorey of shrubs and herbaceous plants.”

On the economic front, trees raise property value by a large percentage. In a tree appraisal by the American Forestry Association, a single tree was found to provide $73 worth of air conditioning, $75 worth of erosion control, $75 worth of wildlife shelter, and $50 worth of pollution reduction. To put this into perspective, the compounding of the total $273 for 50 years, at 5% interest, would amount to a whopping $57,151.

Since tree planting initiatives in the Middle East rely on conventional methods that are severely restricted by water scarcity, Dake Rechsand is offering its Breathable Sand solution, which enables optimal plant growth, with nearly 80% less water use. This transformative solution is now being backed by advocates for large-scale tree planting initiatives, such as Goumbook, which has the distinction of planting over 95,000 ghafs in the region.

“Ghaf is an indigenous plant in the UAE, Oman, and Saudi Arabia. Thanks to its drought–tolerant and evergreen properties, it is possibly the sturdiest plant in harsh desert environments,” Tatiana Antonelli Abella explained. “It can be seen growing on low sand dunes, undulating sand sheets, and along margins of gravel plains, in the Emirates of Abu Dhabi, Dubai, Sharjah, and Ras Al Khaimah. The tree taps water stored deep underneath the sand surface, with roots that penetrate as deep as 30 meters. Thus, ghaf is able to sustain itself under very low rainfall, and still stay green.”

For their part, Dake Rechsand is committed to empowering corporates, educational institutions, communities, and sustainability champions all across the Middle East, as partners that make it possible for all interested parties to contribute to the greening of the region, using the scalable and water-wise Breathable Sand solution.

“Ghaf is a drought-tolerant tree that exemplifies resilience. It’s a habitat for birds like yellow-throated sparrows and long-legged buzzards, an indicator of underground water, and a cultural insignia,” explained Chandra Dake. “Dake Rechsand would like to extend an invitation to all ecologically conscious entities in the GCC, to commit to being sustainability champions, and leverage our breakthrough technology to help transform the region through water-wise tree planting initiatives. Together, we can make a dramatic difference to the net carbon-footprint and extent of green cover, within the region”.

“Today, as part of CSR initiatives, companies and institutions can plant between 100 to 1000 trees and, in doing so, unlock quantifiable economic, social, and environmental benefits. Trees are a gift that keeps on giving, and there’s no better time than Ramadan, to contribute to creating a better and more sustainable world”, Chandra added, in closing.