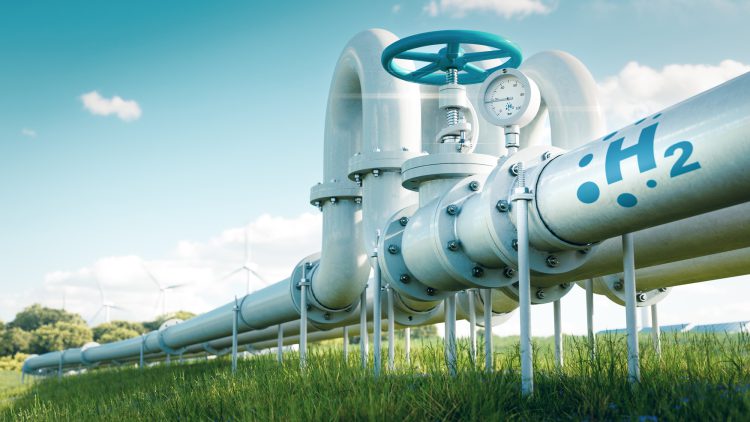 A hydrogen pipeline illustrating the transformation of the energy sector towards to ecology, carbon neutral, secure and independent energy sources to replace natural gas. 3d rendering

The GCC is poised to play a key role in the world’s much anticipated future hydrogen market, with the UAE, Saudi Arabia and Oman looking to become leaders in the export of clean fuel, which will help drive the evolution of the region’s energy sector, according to a new report by the World Future Energy Summit.

The World Future Energy Summit – the leading business event for future energy and sustainability which runs at Abu Dhabi National Exhibition Centre from January 16-18 – the report, commissioned from business consultancy Frost & Sullivan, paints a picture of huge opportunity for the region.

The report highlights that with GCC countries seeking to achieve energy sustainability through a combination of renewable energy integration, energy-efficiency implementations and hydrogen production and transport, the region’s energy sector is set for wide-scale evolution.

“Hydrogen has gained increasing recognition as a key contributor to the evolution of the energy sector and is expected to play a key role in decarbonising the economy across end-use sectors in the GCC,” says the report. It adds: “GCC countries, especially the UAE, Saudi Arabia and Oman, are working on national strategies aimed at developing the hydrogen market in the region and positioning themselves as future hydrogen exporters.”

GCC countries currently use large quantities of natural gas-based grey hydrogen, and the availability of low-cost natural gas coupled with the ease of carbon capture, utilisation and storage allows for the cost-competitive production of blue hydrogen though the GCC has several competitive advantages to play a key role in the global green hydrogen economy. These advantages include solar and wind resources, financial capabilities, and export potential.

“Not only does the region have strong connectivity with developed economies in Europe, but a network of ports and pipeline infrastructure provides the region access to fast-growing markets in Asia and Africa. These trade routes and connectivity are expected to play a key role in hydrogen transportation, which would prove critical in meeting end-user demand for the fuel as future large demand markets such as Europe and Japan could face challenges in ramping up hydrogen production to meet demand requirements,” says the report.

The report recommends the region acts quickly to leverage a first-mover advantage and commit investments to achieve future cost competitiveness in the wake of rising competition from regions in North Africa, Europe, and Australia.

The report comes ahead of the World Future Energy Summit 2023, which will have a strong focus on the sector’s potential through the new Green Hydrogen Innovation Hub, catering to start-ups and SMEs. Embracing the upward momentum, the World Future Energy Summit will also be producing three dedicated podcasts on the topic as the first in a series centred around renewable energy, sustainability, and climate change.

“Summit goers will get deep insights into the current and future solutions enabling hydrogen to play a critical role in the energy transition,” commented Leen AlSebai, Head of World Future Energy Summit and General Manager of RX Middle East, the event’s organiser. “The entire hydrogen eco-chain will be examined along with the key technologies that will enable the production, transport, storage and use of green hydrogen.”

Other hydrogen-related companies taking part at the World Future Energy Summit include the U.S. company Ohmium International who will be showcasing its cutting-edge Proton Exchange Membrane (PEM) electrolyser technology, which converts renewable energy to emission-free hydrogen. Ohmium International’s CEO, Arne Ballantine, says the company will be looking to meet organisations who want to realise the potential of green hydrogen to deliver on their decarbonisation and sustainability goals.

“Ambitious net-zero commitments and increased collaboration are accelerating the pace of change and support for the UAE’s Net Zero by 2050 goal. It’s great to see companies across the energy, steel, and cement industries working alongside the Ministry of Climate Change and Environment to reduce carbon emissions, many of which are likely to be met through the deployment of green hydrogen,” he said.

The World Future Energy Summit is hosted by Masdar and is part of Abu Dhabi Sustainability Week, a global platform for accelerating the world’s sustainable development. The event is also, for the first time ever, held in partnership with ENOWA.

For more information on the event and how to be involved, please visit https://www.worldfutureenergysummit.com

For more information on the Innovation Hub and Summit, please visit https://www.worldfutureenergysummit.com/en-gb/content-hub/form.html