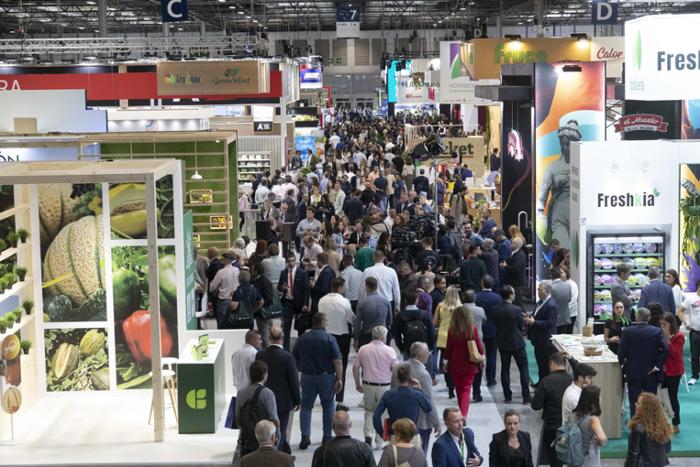 Fruit Attraction 2022 concluded its 14th edition on 6 October with excellent results,  described by the participants as very positive since it opened its doors on Tuesday 4th Oct. Over the three days, a total of 89,535 professionals from 137 countries attended the event, which was the largest in its history.

The fair, organised by IFEMA MADRID and FEPEX, with Andalusia as the Guest Region, registered a participation of 1,740 exhibitors from 57 countries, and an occupation of more than 58,300 net square metres of fruit and vegetables spread over 8 pavilions of the exhibition centre. This represents an area growth of 42% compared to the 2021 edition, and 4% compared to prepandemic levels in 2019. The figures have turned Madrid into the fruit and vegetable capital of the world as well as ratifying Fruit Attraction as a key instrument for global fruit and vegetable marketing with the capacity to promote worldwide exports in the sector.

International participation has grown strongly, representing 35% of the surface area and with exhibitors from 57 countries. European presence is noteworthy, with a significant occupation from Italy, France, the Netherlands, Portugal, Belgium, Germany, the United Kingdom and Belgium, in addition to the increase in participation from the Americas, from countries such as Ecuador, the United States, Chile and Colombia, and from Africa.

One of the aspects most highly valued by the attendees was the quality and professionalism of the international visitors from 137 countries , who represented 40% of the total number of attendees. Once again this year, the largest number of visitors came from Europe, especially from Italy, France, Portugal, the Netherlands, the United Kingdom and Germany. The biggest increase was in Latin America, where growth has been recorded in countries such as Peru, Chile, Brazil, Colombia, Mexico, Ecuador, Argentina and Costa Rica, among others.

Fruit Attraction has also provided participants with a platform for international promotion and expansion with the ‘International Guest Programme’, financed by the fair, in collaboration with the Ministry of Agriculture and ICEX, which attracted 669 large buyers, retail purchasing managers, importers and wholesalers from 65 countries to Madrid. In this context, the ‘Guest Importing Country Programme’ also stands out, this year counting on Canada, the United Arab Emirates, Saudi Arabia and Vietnam.

In terms of Spain, Fruit Attraction 2022 was attended by all the autonomous communities except the Balearic Islands. With more than 38,000 square metres of exhibition space, its success is mainly due to the great interest of Spanish fruit and vegetable production in international marketing, precisely in a key month for campaign planning. In total, there were 861 Spanish exhibitors, with Andalusia having the largest number of companies (200), followed by the Region of Valencia (173), Murcia (117), Catalonia (101), and Madrid (76). There were also notable participations from Aragon, with 39 exhibitors; Extremadura (36), La Rioja (25), Castilla La-Mancha (24), Castilla y León (20), as well as Navarre, the Basque Country, Galicia, the Canary Islands, Cantabria and Asturias.

Once again, Fresh Produce, the exhibition area for fruit and vegetable producers and traders, was the most represented segment, accounting for 72% of the offer. However, this year’s edition also saw a notable increase of 57% in the Fresh Food Logistics area, as well as in Smart Agro, with an increase of around 99%.

In the field of innovation, Fruit Attraction hosted a new edition of The Innovation Hub with the exhibition of a total of 46 products and services. Along the same lines, the Innovation Hub Prize was awarded to Surinver in the Fresh Produce category, Syngenta in the F&V Industry category and Granada La Palma in the Sustainability and Commitment Actions category, each of which received 2,000 euros.

A full programme of conferences made Fruit Attraction the knowledge centre for the sector, with 3 congresses and 84 presentations characterised by the great diversity of content, as well as the high level of the participants and speakers. Some of the highlights included the 3rd Fresh Food Logistics Summit, the Biofruit Congress, Biotech Attraction 2022 and the 6th Grape Attraction Congress, and other sessions such as Public funding lines for expenditure and investment in research and innovation in the fruit and vegetable sector; and the New Regulation on the Sustainable Use of Plant Protection Products: complex, unrealistic and with a direct impact on European agriculture.

The fair was the setting for the prize-giving ceremony for the winner of the second Fruit Attraction Podcast Contest: #agroinspiration stories, in support of new communication formats within the agri-food sector. The winner was Huertas, the origin from Cricket.

Fruit Attraction once again promoted the donation of fruit and vegetables from exhibitors for the Madrid Food Bank, which managed to collect 39,000 kilos of fruit and vegetable products, distributed among 565 charities registered in the Community of Madrid, which serve 186,000 people every day.

Organised by IFEMA MADRID and FEPEX, Fruit Attraction 2023 will be held from 3 to 5 October at the fairgrounds.