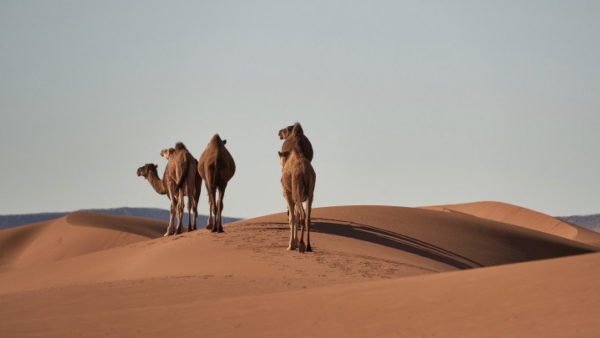 Counting Camels in The Desert – Drones Lead a Path to Sustainable Agriculture by Mapping 1,100 km2 of Farmlands

This is the story of stacking agriculture against an unfavourable environment- A quest to increase Food Security and reduce Import Dependency by improving agriculture in a hot and dry desert. The UAE’s Ministry of Climate Change and Environment’s (MoCCaE) goal was to use detailed agricultural data to increase resource efficiency, better direct farmers’ efforts and preserve scarce natural resources. This goal would be realized by the data supplied by drones.

Agriculture is a resource-intensive industry; it places a strain on natural resources and the environment. At the same time, Agriculture is vital to economic growth and often contributes to around 25% of GDP growth in developing countries. In the UAE, we enjoy clear blue skies with very little cloud cover throughout the year, which is great for planes and drones but not so much for plants and agriculture.

The resource intensity combined with the already scarce resources and unfriendly environment increases the need for a Sustainable Agriculture model that maximises resource efficiency, increases farm yields and profitability, enhances the quality of life for farmers, and boosts food security. But gathering relevant and valuable data to build this model upon can be challenging. Especially if you’re counting camels, trees, plants and livestock across 1,100 kmsq

If you were presented with a vast expanse of desert and were asked to account for every tree and its age, livestock of all kinds, greenhouses and barns, crop and shrubs and water wells and pipelines- how would you go about it?

You could try Satellite Imagery, but it would lack the necessary clarity to accurately identify distinguishing features. Terrestrial survey is not feasible at all; since surveying 1,100 kmsq by foot would take so long that by the time you finish, the initial set of data would be invalid. As a last resort, you could take data from sample areas and estimate the total. But, we are looking for precision, and we are not out of options yet.

Drones or UAS (Unmanned Aerial System) have already proven to be a formidable force in the Survey & Mapping world. Drone Surveying companies can use an assortment of drones in conjunction with sensors to quickly and efficiently map areas. The type of drone used will depend on the project requirements; on a general note, multi-rotor drones are more suited for smaller locations while fixed-wing drones excel in larger projects.

Drone Surveying is a relatively simple process where the drone autonomously follows a predetermined flight path taking pictures or videos. The captured data is then processed using software like Pix4Dmatic or Pix4Dmapper- the resulting output is an accurate Orthomosaic map. However, the process of Asset Surveying can be slightly different.

Conducting an Asset Survey is similar to normal Aerial Surveying, the exact same process for pre-flight and during flight; but it is during post-flight that an additional step is added. That step is analysing the orthomosaic map. The map is analysed to produce detailed and accurate Asset Survey Reports; each report’s parameters are pertinent to the project itself. MoCCaE’s primary purpose is to gain insight and drive agricultural growth. Hence the Asset Survey takes into account the various flora and fauna.

Analysing this huge dataset is a difficult task in and of itself. This is especially true since time is against us; the features we are analysing are subject to change within just a few months. If the reports are generated too late, the data would be invalid as a young tree could be an older tree now, that hen we recorded is either lost or no more. In the interest of saving time and preserving data integrity we had to innovate, we had to build our own Machine Learning (ML) algorithm and put it to use.

Machine Learning, or as we came to understand it- was a lot more learning than machine. While we were dependent on it to deliver results, we also understood that it would be a challenge to turn it into an operational asset. From the time we started with the Proof of Concept, we began working on our Machine Learning algorithm.

The next stage was a rigorous regiment of testing, training and repeating. We would feed a steady stream of high-quality data for the machine to analyse and improve upon in a process known as Semi-Supervised Learning. Our main objective in this project was for the algorithm to read orthomosaic maps and correctly identify plants, animals, features and structures. So we continued to feed it with data and flag distinguishable features for it to use. For example, we mark a palm tree by its pointy leaves that are not densely packed together.

Challenges we faced in training our Machine Learning Algorithm

As the machine learnt, we learned alongside it. Our first challenge was data size; Orthomosaic are heavy files, and so the maps had to be broken down into smaller segments. Splitting the maps led to our next issue, albeit a small and easily fixed one. Splitting the images had created areas near the edges where two images would overlap, meaning the same stretch of trees would repeat for a few pixels in the next segment, and the machine would count these trees twice. The solution was relatively simple; we just had to tweak the splitting to be more precise. 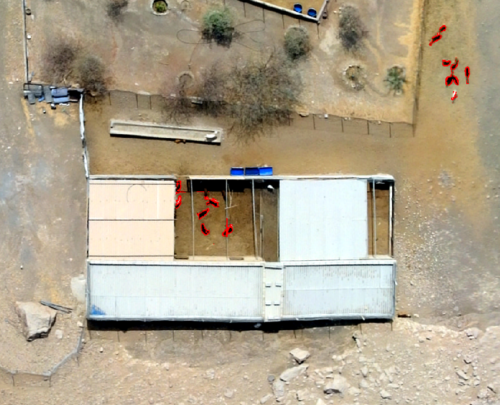 What do shadows, young trees, old trees and dead trees have in common? A lot apparently. Our next challenge was to meticulously table some of the finer details so that the Machine Learning algorithm could effectively tell apart trees from their shadows and identify the trees’ age. In a similar vein, we grew to know the Chico tree and Pomegranate Tree intimately. While most trees looked identical from a top-down aerial perspective, these two, in particular, were indistinguishable. The solution was again, more distinguishing features.

Overcoming all these challenges, we successfully trained the Machine Learning algorithm to accurately identify and classify when presented with data. However, we still passed the processed data through human QC to ensure all our outputs were optimal and accurate. We endearingly labelled it as- Manually Assisted Machine Processing.

Spread out over six Emirates (Dubai, Sharjah, Ajman, Ras Al Khaimah, Umm Al Quwain and Fujairah) and vastly different landscapes our pilots had their work cut out for them. While the Machine Learning software enjoyed a comfy temperature-controlled room, our pilots were out braving nature in the hot and harsh desert.

As established earlier, drones were the only means to obtain this data. Satellites would not have the required clarity. Terrestrial surveying would be too expensive and time-consuming; by the time a surveyor completed the terrestrial survey, the data collected from the initial sites would be rendered obsolete due to the passage of time. The only question that remained was – which drone?

Multi-rotor drones were not suitable, given the size of the project; making the senseFly eBeeX fixed-wing drone the perfect choice. The eBeeX’s endurance battery- supporting 90 minutes of flight time, coupled with the powerful eMotion software and S.O.D.A camera made it the ideal drone for this project.

The project was split into two phases; Phase 1 would be the desert and relatively open plateaus, Phase 2 would cover the mountainous regions and wadis. They were divided as such because the operational approach to these two sections is very different. Making it easier for our operations team to be prepared and carry out their mission.

Phase 1 was tackled by just two teams, one mobile team and one stationary team. Team 1 would be dropped in strategic locations from where they could cover multiple quadrants. Whereas Team 2, the mobile unit would cover the difficult to reach and oddly sized segments. Operationally speaking, this phase was simple; the terrain being relatively flat- flight planning, lift-off, and landing was easy enough. But the extreme heat posed a challenge. Once this phase was over, it was onto Phase 2, the tougher part.

Phase 2 was a real challenge. The mountainous regions would prove difficult to traverse and even more challenging to plot flight paths. Extra care and caution were necessary during flight planning due to the region’s varying elevation; this was a two-pronged issue. First, was ensuring the drone and team’s safety at all times; second, was maintaining consistency of data accuracy.

A drone must fly at a uniform altitude from the ground to achieve consistent accuracy. The  pilots had to be hyper-vigilant of the drone’s height and position as one mishap might send the drone crashing into the mountainside. Still, being seasoned veterans, they averted most of this risk during the flight planning phase by coming up with their own system. By following a zig-zag pattern perpendicular to the mountain, they would maximise the time spent at a fixed altitude and minimise any ascends and descends. 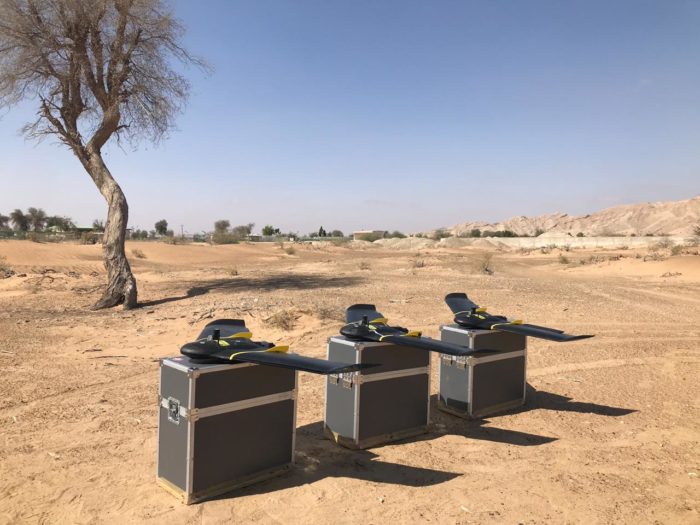 This mission would take us from mountains’ tips to the depths of wadis, a trek that challenged even our hiking enthusiast. Mobility was another challenge we had to work around, cars and trucks could only take us so much the rest had to be on foot. This being drone-powered, we didn’t need many stops, but we could not even imagine how much harder it would have been if it were terrestrial surveying.

Regardless of mountain or desert, speed was a very crucial factor. Animals being non-stationary beings were challenging to count. If you are not successful in capturing segments in quick succession, the animals could have moved to your next segment; meaning Machine Learning would measure the same animal twice. We expected most of these challenges before and took special care to combat them.

Devising predetermined paths to move between control points we saved a lot of time on the field, enabling us to efficiently and rapidly map the segments. Our expert pilots supported by a fleet of eBees successfully mapped all 1,100 kmsq in just 64 working days. That’s an average of 17 kmsq mapped per day.

The adoption of drones in the agriculture industry has given agronomists a practical approach to sustainable agriculture practises. Using the robust data provided by drones farmers can gain valuable insight into their crops and develop sustainable and effective plans that maximises their resource efficiency and increases yields and profitability.

We provided MoCCaE with accurate Orthomosaic maps and Asset Survey reports that gave them insights into agricultural lands and detailed information like below: 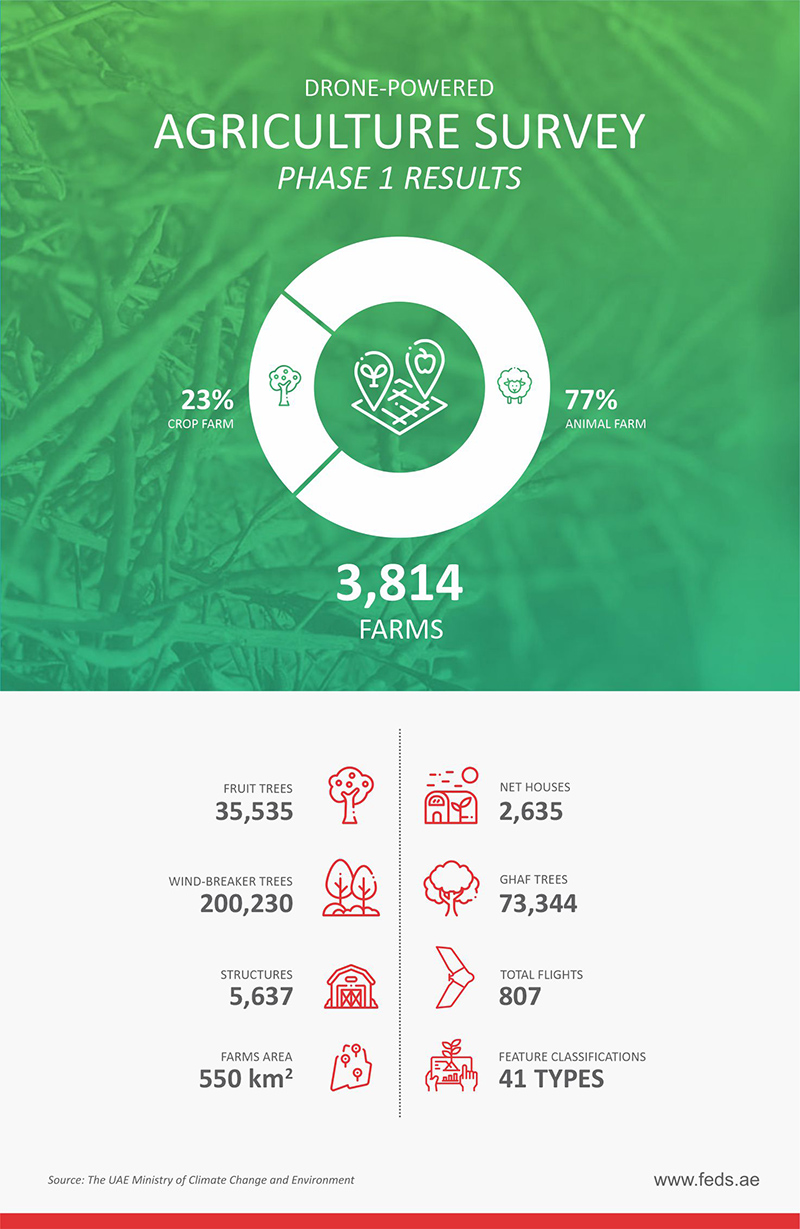 The high-resolution data that FEDS provided MoCCaE enabled them to assess the farmlands and their status accurately. With this data, they can direct the local farmers better and guide them on just how much resources they would require and what crops to grow for better results. Drones afford visibility in a way like never before; previously, it would have been impossible to get an overall and comprehensive data on over 1000kmsq of farmlands.

Without Drones, it would have taken years to aggregate an effective array of data to allow for a large scale sustainable plan for agriculture. Issues like Global Warming and resource depletion would have increased unhindered, making any further sustainable agriculture plans that much harder to execute.

Drones lead the way to a more sustainable tomorrow, and FEDS is grateful to have been a part of this massive project, which is a huge step towards sustainability. If you’d like to further explore the impact of drones in agriculture, do not hesitate to get involved and give us a call.