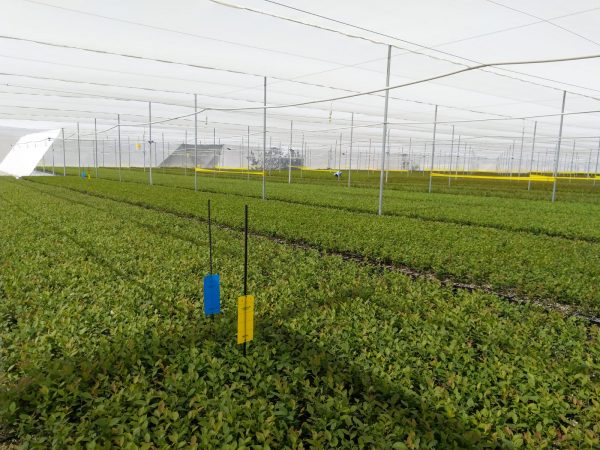 Harmful insects and high temperatures are two of the obstacles that berry fruits producers most face in summer, since they risk compromising crop quality, while creating uncomfortable conditions for workers. Arrigoni responds to these problems with two sustainable and high-tech proposals, which protect plants and increase productivity: Robuxta®, the range of thermo-reflective screens that lowers the temperature even by 10 degrees in the hot months, and Biorete®, effective in insect protection, such as Drosophila Suzukii and Tuta Absoluta.

Berries face no crisis; thanks to the growing interest they spark in the consumer searching for “superfoods” with extraordinary health properties. However, these crops are very sensitive to environmental conditions. Producers around the world are constantly looking for ways to reduce their environmental impact. Furthermore, for these crops, the number of diseases and pests is increasing and the tools to face these challenges are not multiplying at the same rate, especially considering that the world market today requires a reduced use of pesticides.

Arrigoni, international leader in technical textile sector for agriculture, developed several high-tech proposals, to guarantee profitable production, reduce the environmental impact and optimize both sensory and nutritional quality of berry fruits. All this has been demonstrated on the field.

The field test was held in northern Namibia, not far from the border with Angola, where an agricultural redevelopment plan for the area is underway. On this site, now cultivated with blueberries, over 20 hectares of land have been covered with screens ROBUXTA® MDF WHITE, but the area being installed is much larger and will be completed within the next five years. Since the first tests, the results proved to be extremely positive, with great satisfaction of the agronomists on site. The temperatures under cover have in fact reached up to 10 degrees less than the outside, with a consequent greater productivity of the plants and better working conditions for the operators.

At the same time, the percentage of second-choice fruits also fell sharply, which in the first case was 55%, in the second 45.5% and, with the solution proposed by Arrigoni, instead stood at 36.6 %.

In other words, the test showed that 63.4% of the fruits met the ideal standards for marketing, both in terms of size and color.

“Africa offers great potential for berry producers – explains Milena Poledica, agronomist of Arrigoni – but obviously, in order to consolidate good results for this crops, adequate systems are needed. Arrigoni has the right innovative solutions which, on the one hand, ensure sustainable development and, on the other, significantly increase productivity, compared to traditional systems. All this has already been proven in the field and, in general, there are positive expectations for the conversion of large areas into agricultural centres also thanks to Arrigoni’s expertise”.

For complete protection and maximum crop safety, ROBUXTA® MDF WHITE can be integrated with Arrigoni’s BIORETE® AIR PLUS screens, made of high tenacity polyethylene monofilament, effective in preventing harmful insects from reaching crops and causing damage, while increasing air circulation inside. With holes of 1.02 x 0.88 mm, BIORETE® 25 AIR PLUS consequently reduces the need for pesticides, countering the attacks of Drosophila Suzukii, Tuta Absoluta and other insects.

Berry fruits and in particular blueberries, in recent years are experiencing a real commercial explosion. Furthermore, there are several countries in the world where large-scale production is being planned. United States are currently the largest producer of blueberries, with a total quantity of around 700 thousand tons per year. Peru is also experiencing a real “boom”, with production that has marked a + 796% in the last four years. In recent years, it has been found that “zero-cold” blueberry varieties (that is, they don’t need much cold to grow) adapt to the climate of the Western Cape and Namibia, which have conditions similar to Spain and Baja California. Therefore, in the north of Namibia, a major agricultural redevelopment project is underway, with the blueberry as the protagonist. A great interest in the production of berries has also been shown recently by South Africa, Zimbabwe and Swaziland.

Among the most receptive countries is currently the UK, where berry purchases increased by 50% over the last five years which – within the fruit and vegetable sector – represent the best-selling category at the moment (source: Italianberry.it).