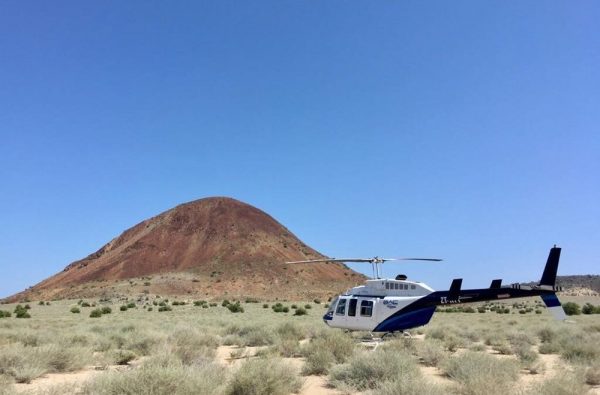 In the last 12 months, food security has been under serious threat from devastating swarms of locusts, destroying crops from East Africa to the Arabian Gulf. With experts warning of a “rolling emergency”1 that could endanger harvests across the regions for the rest of the year, governments and international organizations face a herculean challenge in controlling the infestations. Aircrafts from Bell, the U.S.-based helicopter manufacturer, have been playing a key role in the joint efforts to fight this ancient plague.

According to the UN Food and Agriculture Organization (FAO), desert locusts – whose destructive infestations cause major crop damage – are a species of grasshopper that live largely solitary lives until a combination of conditions promotes breeding and leads them to form massive swarms.

The region’s current crisis began in October 2019 as swarms formed along the Red Sea coastal plains in Yemen Saudi Arabi, Eritrea and Sudan, spreading eastwards across the Arabian peninsula and further south in Africa in the following months2.

By January, Kenya, one of the countries hardest hit by the crisis, was already experiencing its worst outbreak of desert locusts in 70 years. To target this problem, authorities contracted South African helicopter operator BAC Helicopters, who had recently purchased three Bell 206L-4 helicopters, to carry out the Emergency Desert Locust Survey and Control operation in an effected part of Kenya.

The helicopters were tasked with surveying vast areas throughout the Marsabit and Turkana counties in Northern Kenya, locating and mapping the locust swarms which were threatening food security through the region. The 206L-4’s were each equipped with specialized Agricultural Survey Equipment, an FDC Barrier Filter and Satellite Tracking System. Essential data gathered by the survey helicopters was then transferred to both fixed wing and helicopter spraying aircraft, allowing them to accurately target specific areas where the locust swarms were present.

Sameer Rehman, Managing Director of Africa and the Middle East, Bell, commented: “With a number of countries in eastern Africa and some parts of the Middle East at ongoing risk, the FAO has estimated that a locust control plan would cost $76 million to secure agriculture in the affected region. Bell understands the need to protect the food source of these regions and we’re pleased our products can be essential tools in the collective mission to eradicate the problem.

“When it comes to food security, the stakes are very high so the reliability and capability of every tool used in the fight against locust swarms is paramount. The Bell 206, and newer light aircraft like the Bell 505 have shown time and again that they can be trusted to operate in high temperatures and with heavy payloads, providing a capable defense wherever the swarms may be present.”

In most years, desert locust swarms tend to die out during dry season. However, with unusually high rainfall in 2020 in certain regions, the exponential growth in the populations has not abated, creating the specter of further swarms over the coming months.

The FAO states that countries most affected by the locust situation are Ethiopia, Kenya, Somalia in Africa as well as Yemen, Saudi Arabia and parts of the UAE and Oman in the Middle East.