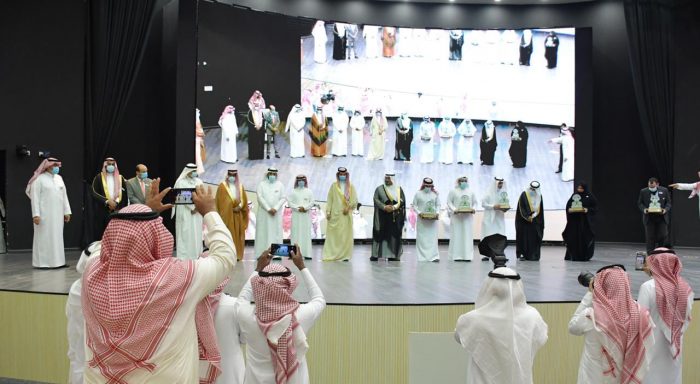 Almarai Company honored the winners of the 12th session of Almarai Veterinarian Award within a ceremony held at Prince Sultan Cultural Center’s theater in Jizan. This event conducted under the patronage of His Royal Highness Prince Muhammad bin Nasser bin Abdulaziz, Governor of Jazan Region, with the presence of Dr. Issa bin Yahya Al-Banawi, the Undersecretary of Jizan Region’s Authority for Development Affairs, and Dr. Hassan bin Rafdan Al-Hajhouj, the Vice President of King Faisal University for Postgraduate Studies and Scientific Research, as well as Mr. Faisal Al-Fahadi the Vice President of Almarai, and Dr. Salah bin Abdulaziz Al-Shami, Secretary-General of Almarai Veterinarian Award and President of the Veterinary Medical Association.

During his speech at the ceremony, Mr. Faisal bin Marzouq Al-Fahadi, Vice President of Almarai, has congratulated the winners, appreciating the importance veterinary profession in livestock development, as well as the Almarai Veterinarian Award contribution towards supporting Veterinary profession and enriching the scientific research in the field of veterinary locally and in the GCC.

“Realizing the award’s importance for the environment and food future, Almarai will continue sponsoring this award and other awards that keep us looking forward to society’s desired positive impact,” Almarai’s VP said. “This positive impact motivates us at Almarai to implement these sponsorships with enthusiasm and glow that does not go out,” he added.

The ceremony witnessed honoring the five winners in the award’s branches. As the award for the best Saudi veterinarian in veterinary laboratories was received by Dr. Alaeddin bin Hamad Hakami from the Jazan and Dr. Theeb bin Mahras Al-Marri from the Ministry of Environment, Water and Agriculture. The award of the best veterinarian in the Gulf Cooperation Council was won by Dr. Ahmed Dhaidan Al-Ajmi, from the Public Authority for Agriculture Affairs and Fish Resources in the State of Kuwait. Moreover, the award of the best veterinarian in the Gulf Cooperation Council countries was received by Dr. Samah bint Mahmoud Al-Sharif, from the Ministry of Agricultural Wealth, Fisheries and Water Resources in the Sultanate of Oman. The distinguished researcher in veterinary medicine Award was won by Dr. Islam Muhammad Saad Eddin from Egypt, who works at the College of Food and Agricultural Sciences at King Saud University.

Almarai Veterinarian Award was launched in 2010 to emphasize the important role of the veterinarian in protecting livestock’s public health in the Kingdom and supporting the veterinary medicine profession.