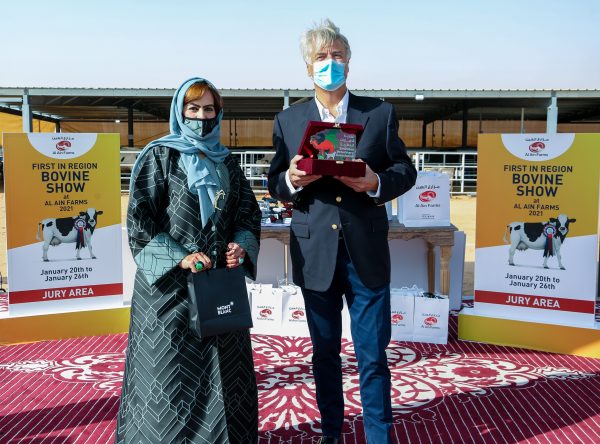 Al Ain Farms, UAE’s first and largest local dairy brand, has announced the winners of the seven-day local dairy farmers contest, First in Region Bovine Competition, that gathered the representatives from all local farmers and dairy industries competing in a challenge of highest milk production per a cow. The winner of the contest was Al Rawabi Dairy, who clinched the title and a cash prize of AED 20,000. Marmum Dairy took second place, with an AED 19,000 cash prize, and Al Ain Farms took third place and AED18,000. 7 more winners were announced from Al Rawabi Dairy, Zakher Dairy Farm, Al Ain Farms, Al Dahra Dairy Company and Emirates Dairy Farm who all took the title of the winners of the bovine show, first in region. Other participating farms included MTKMN, Marai Farms and Hilli Farms.

As an active supporter and advocate of local dairy farming, Al Ain Farms instituted the event as a platform to bring local farmers and large-scale dairy producers together, who jointly play a key role in providing fresh, healthy, and nutritious produce for residents of the UAE and by their combined efforts play a major role in the food security of the country. The event also emphasizes Al Ain Farms’ commitment to animal welfare, and the exceptional standards of animal care adopted by each participant in and throughout the event, as the cows were hosted by Al Ain Farms veterinary teams and handlers, and were taken care with all needs of food, water, milking and care 24/7 on Al Ain Farms site.

CEO of Al Ain Farms Willem van Walt Meijer said; “The event has been a true celebration of local food production scale, showcasing the excellence and integrity of the UAE’s local farming community. As a proud host of this competition, Al Ain Farms will continue to work closely with the local authorities, and colleagues from the farming sector to bring new information and opportunities that support this vital community in the UAE”.

Dr. Roula Shaaban said; “While we congratulate the winners, it must be said that all the participants from the local farms have exceeded our expectations, and truly deserve the recognition in the Al Ain Farms Bovine Competition. It has been a privilege for me to judge this contest, and to work with Al Ain Farms as we support the local farmers of the UAE”.