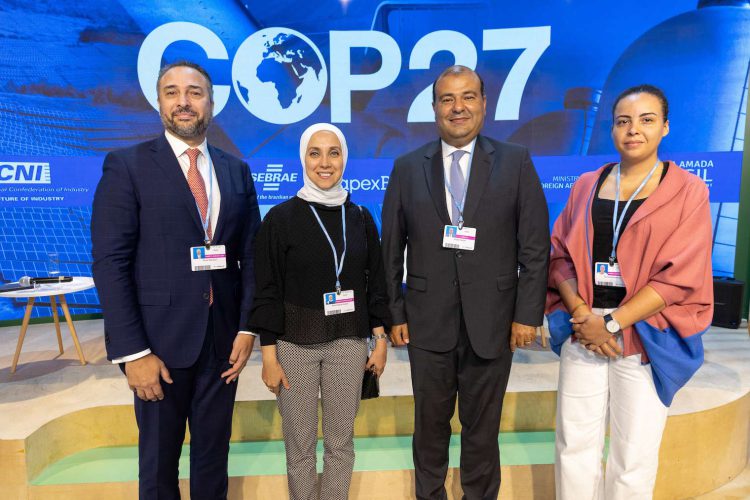 The Arab Brazilian Chamber of Commerce (ABCC) organised a panel discussion during the 27th United Nations Climate Change Conference (COP 27), which is being held from November 6 to 18, 2022, in Sharm El Sheikh, Egypt. The panel discussion aimed at strengthening and expanding the existing partnership between Brazil and the Arab countries to advance sustainability and focused on the collaborative and coordinated efforts of both nations in the carbon market, renewable energies, food security, and transport.

The discussion, which was held in the Brazilian pavilion at the COP27, was primarily centred on the robust relation between the Arab countries and Brazil and further explored potential prospects for the expansion of this partnership to achieve sustainability goals including the achievement of emission reduction targets of both the countries.

The panel discussion was attended by several prominent figures including Khaled Hanafy, Secretary-General at the Union of Arab Chambers, Sara Hassan Kamal Elgazzar, Dean of College of International Transport and Logistics – Arab Academy for Science, Technology, and Maritime and Consultant at the Union of Arab Chambers, and Tamer Mansour, CEO and Secretary-General at the Arab Brazilian Chamber of Commerce (ABCC). The event was moderated by Fernanda Baltazar, Institutional Relations Director at ABCC.

Osmar Chohfi, President of the Arab Brazilian Chamber of Commerce said: “The panel discussion held at COP 27, one of the most significant global events, focused on exploring new avenues to expand the strong partnership between Brazil and the Arab countries. To ensure food security and sustainability, the Arab countries are currently investing in agriculture, infrastructure, logistics, and transportation. They are shifting their perspectives on their investments in order to guarantee the security of a high-quality food supply, as well as focusing more on sustainability. Furthermore, to prevent water shortage, we need to leverage the most cutting-edge technologies and sustainable business practices. We might add value to sustainability and demonstrate how it generates significant potential. Human security, financial guarantee, economic and national stability, and the basic existence of the planet are all at stake in light of the catastrophic climate change.”

The panel stressed that there are several forms of sustainable economic collaboration between Brazil and the Arab nations, and the latter intends to have green, ecologically friendly businesses. The carbon market is one of the core aspects of this alliance. The Brazilian market has surplus carbon credits to sell, and the Arab nations are well-prepared to buy. Additionally, Hanafy stated that the maritime transportation between Brazil and the Arab nations has a significant influence on the environment. He mentioned several projects and initiatives that might take green maritime transportation into consideration, as the emission from shipping is potentially large.

Furthermore, Sara Elgazzar suggested that the nations can collaborate strategically to minimise the impact of climate change on both the Brazilian and Arab sides. She went on to say that there are numerous sustainability projects and initiatives underway in Arab countries, with the UAE hosting the COP 28 in Dubai the following year being the best example. She also referred to Masdar, a renewable energy company that invests in a number of nations in the Middle East and North Africa (MENA) region, in advancing green economy as well as sustainable urban development.

During the panel, Hanafy further suggested that efforts must be made to integrate the private sectors of Brazil and Arab in order to produce more sustainable initiatives. Along with food security, he also emphasised on water crisis, underlining the necessity to implement more advanced technologies as well as sustainable business practices to prevent water shortage. The three panellists agreed that the parties’ strategic alliance is crucial to developing initiatives that promote sustainability in both nations.

Additionally, in an event parallel to the COP27, ABCC also inked a term of commitment with the Brazilian National Confederation of Industry (CNI) at the Renaissance Hotel, to strengthen cooperation, as well as develop an institutional strategy for the upcoming COP28 which will be held in Dubai in 2023. The agreement also includes a framework for developing a low-carbon economy strategy, between the Arab countries and Brazil.

Regarding the agreement, Osmar Chohfi said: “We are pleased to ink this agreement with the Brazilian National Confederation of Industry (CNI). At present, the world is combining efforts to combat against the changing climate scene and build a sustainable future. Many Arab nations have already made audacious commitments to decarbonisation, and the governments have pledged to make long-term investments to build completely innovative, green, and contemporary production chains. They have also created frameworks for 2030 that include efforts to raise the proportion of renewable energy in the power matrix, mostly through the production of solar, wind, and biomass energy. Through the agreement with CNI, we look forward to contributing significantly to the global efforts of transitioning towards a green future.”